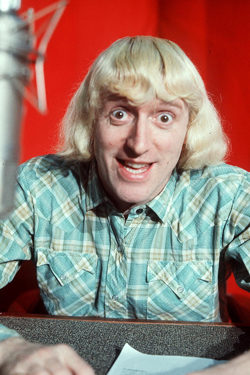 THE collection of stuffed humans owned by the late Sir Jimmy Savile, rated as one of the finest in the world, is to be sold at auction. Sir Jimmy owned close to 3,000 corpses at the time of his death.All have been professionally preserved, though some have suffered damage from excessive restoration.

The majority of the dead have been arranged in tableaux from Sir Jimmy’s life, ranging from a marathon run to a performance by Pan’s People on Top of the Pops.

The centrepiece of the collection, six Cub Scouts posed on a rollercoaster and described as ‘showing some marks of wear and tear’, is expected to fetch £200,000.

Auctioneer Denys Finch Hatton said: “This is an outstanding collection spanning generations, and I can assure buyers there is no doubt about their provenance.

“Every corpse has signed a legal waiver giving Sir Jimmy all rights to their mortal remains, usually in the form of a PS on their letter to his popular show Jim’ll Fix It.”

All money raised by the auction will go to Sir Jimmy’s favorite charities.

At the DJ’s request, Sir Jimmy’s own preserved cadaver has been housed in a Leeds tomb which opens to the public for the summer season from June.

Fitted with a pullstring, when activated it recites the entertainer’s famous catchphrases ‘How’s about that then, guys and gals, ‘Now then, now then’, and his trademark ape-like ululating wail which cannot be translated into text.