Some of our best friends own black people, say banks 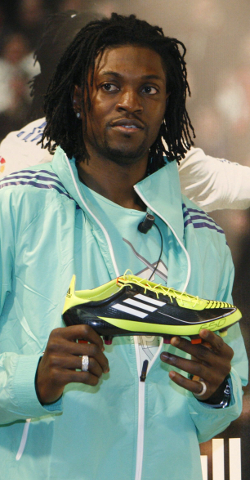 EMMANUEL Adebayor will ask Harry Redknapp to tell a Togolese orphan that his wage demands are unreasonable.

The somnambulant striker, on loan from Manchester City after their dressing room was condemned by the local council for overcrowding, donates a large amount of his wages to African charities leaving him to  survive on a meagre fortune.

Adebayor now hopes to make his loan deal permanent by clicking his fingers during talks to signify yet another malnutrition-related death.

His agent Bill McKay said: “Rather than trying to get my client a new skankatorium in his basement I thought I would try the much easier sell of stopping child poverty in a particularly war-torn part of central Africa.

“We’ve got nine year-old Mamadou on standby at Lomé International Airport to fly over and look sad sat next to Emmanuel throughout the meeting. Hopefully his stomach will rumble. Wouldn’t that be great?”

Adebayor has impressed during his initial four months at Spurs by not going on strike or falling asleep during a match.

Some of his performances have even helped propel the club to the position where they will not win the league again this season, but by a smaller margin than for some time.