Adebayor to repay Arsenal by signing for Spurs 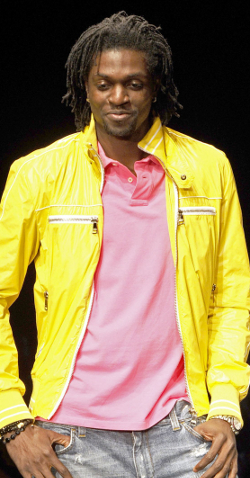 TECTONIC striker Emmanuel Adebayor is considering a move to Spurs to cheer up Arsenal fans.

The Togolese perpetual inertia machine left Arsenal as part of Manchester City’s bid to buy every striker in the world in alphabetical order, but wants to thank them for all the years of mooching around the six yard box for 80 grand a week.

Footballologist Wayne Hayes said: “When Bale crosses the ball in the 89th minute of a 0-0 north London derby and, instead of being in the box to head it in, Adebayor is sat next to Redknapp in a woolly hat listening to his stereo, you feel a hatchet will finally be buried.”

“They’ve had very little to cheer about recently at the Emirates, but I think the sight of him curled up like a cat in the centre circle wearing a Spurs shirt will be just the fillip they need.”

Adebayor will undergo a medical before the transfer takes place, with doctors being warned that it is entirely normal for him to have a resting heart rate of 1.4 beats per minute and for his blood to be made primarily from Horlicks.

If the proposed loan deal is completed in time, he could make his debut against Manchester United, leaning against the goal post chatting to de Gea about shoes while his new team mates remonstrate furiously with him.

Adebayor said: “The two managers are discussing a deal but I don’t know an awful lot about it because I’m really sleepy.

“But if it goes ahead it would be great to give something back to the Arsenal fans, even if that something is nine months’ worth of teeth-grindingly infuriating idleness to their biggest rivals.”