The Daily Mash would like to make it clear this not a ‘Kill Bill’ joke. 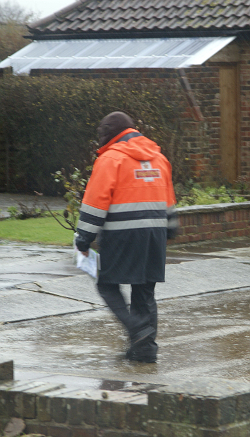 ROYAL Mail ‘while you were out’ notes are developing a snide undercurrent, it has emerged.

The ubiquitous red card rectangles that are thrust through your letterbox if you take over a nanosecond to reach the door have had their text rewritten to say subtly resentful messages like ‘sorry you were out and missed your extremely heavy package’.

Postman Stephen Malley said: “In case you hadn’t suspected, we really fucking hate lumping around all that shit you buy on the internet.

“Unfortunately, we are contractually obliged to make a token effort at delivery. After which you will be forced to drive to the nearest postal depot, which is usually on a remote rocky outcrop four counties away and only open during an obscure time period called ‘the hour of the beasts’, to get your shitty Vince Vaughn DVDs.

“But you need to know, we don’t like you or your parcels one little bit.”

Housewife Emma Bradford, from Hatfield,  said: “Given the superhuman speed with which our postman can put a bit of card telling me I’m out through my letterbox and vanish, I’ve become increasingly obsessed with the idea that he’s some kind of mystic who learned to teleport at a Shaolin monastery.

“Yesterday there was no knock at the door, followed by the insertion of a red note reading, ‘I appear to have missed you. I’d try again later, but I’m really tired actually.’

“I opened the door before it hit the carpet. Nothing.”

Postman Roy Hobbs said: “I was actually on her porch roof. I have springs attached to my Doc Martens. Not that you care.”