CHRISTMAS was just a brief pause before entering tier 4 this year, so as a new year begins use these excuses to finish that bottle of Baileys:

A rock-solid excuse. You’re duty-bound to drain every last drop of that sickly nectar. Any alcohol goes ‘bad’ if you don’t drink it all once you’ve opened it. That’s just science.

That Pixar movie made me very emotional

What better way to get over the emotional impact of a film like Soul or Up than with another massive Baileys? You need this drink to level yourself out. It’s not your fault, the blame lies with the makers of animated children’s films.

Rather than feel guilty about drinking into another day, sneak another drink in at 11.55pm, just under the wire. Ignore the fact that you have just poured yourself almost a pint of a drink made with hard liquor.

It’s been a hard year

Impossible to dispute. Yes, you’ve been on fully paid furlough with your feet up for six months, but look sad and pretend you’re gutted to have missed your hellish daily commute and arsehole colleagues. You might even start to believe it.

I need to be pissed to Zoom my in-laws

When speaking to the in-laws on Zoom you need to keep your buzz topped up, and that’s where a 10th glass of Baileys really comes into its own. How else can you survive hearing Clive’s hilarious witticism about crackers never going off properly for the 12th consecutive year?

Sure, not all traditions can be upheld this year. But getting stuck into the Baileys is one thing the government can’t take away from us. You’re not gratuitously polishing off the dregs of booze, you’re striking a blow for freedom.

Trampoline in front garden knocks 15 per cent off house prices 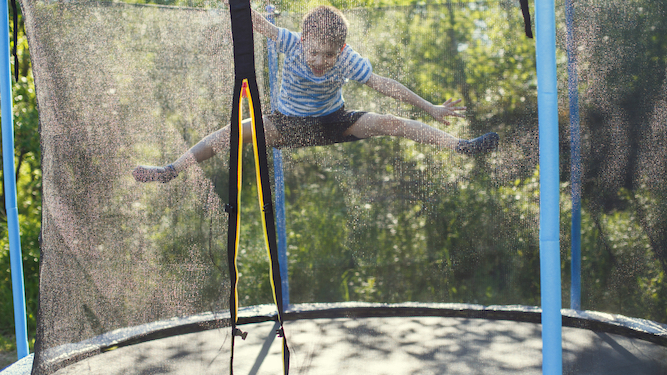 THE value of every house in a street has dropped by 15 per cent after a child’s Christmas trampoline was set up in the front garden.

The 12ft Sportspower trampoline first appeared in the garden when assembled on Boxing Day, and was assumed to be moving to the rear garden until tethered to the lawn with ropes this morning.

Neighbour Martin Bishop said: “Well, bang goes my hope of unlocking my capital with a swift remortgage. Not with that f**ker there.

“I have nothing against the joyful cries of children, but the little bastard’s up and down on there all day long. He’s out in his pyjamas at 8am. That’s not kerb appeal.

“Some neighbours exchange presents at Christmas, I wasn’t expecting ours to give us negative equity.

“I’ve had Purple Bricks out and they’ve confirmed there’s a sixth off the price of every house in the street, with a further two per cent annual annual depreciation once it starts to rust.”

Trampoline owner Steve Malley said: “Apparently it’s easier to plumb in the hot tub if we have it out the front. That’s happening in spring.”