MOTHERS across the UK are very, very drunk right now, it has emerged.

Mums who normally stop after two glasses of wine have finished the bottle and have rapidly moved from merry to smashed, just like they do every year.

Helen Archer, a mother of three, is delighting her children with her uncharacteristic drunken antics while continuing to insist she is not intoxicated in the least.

Daughter Sierra said: “She’s trying to get us all up to dance now. She’s put on Young At Heart by the Bluebells and she’s calling us boring bastards. This is brilliant.

“Her paper crown’s crooked, she’s flushed and she’s just told Dad if he won’t dance for one song then he can forget about his ‘New Year’s bonk’ this bloody year. And she’s told my brother Oliver that’s where he came from.

“Now she’s dancing with the dog. Now she’s fallen over and said ‘Oh shit’ instead of ‘Oh sugar lumps’. I’m going to get her another glass. This is better than last year.”

Helen said: “Drunk? I don’t get drunk. I think a few of those chocolates your Dad got me might have been booby. I mean boozy. I’m going upstairs for a lie down.”

Mum then slept for three hours before coming downstairs complaining of a headache and making a mug of tea before starting on the washing up.

Man drunk before getting dressed 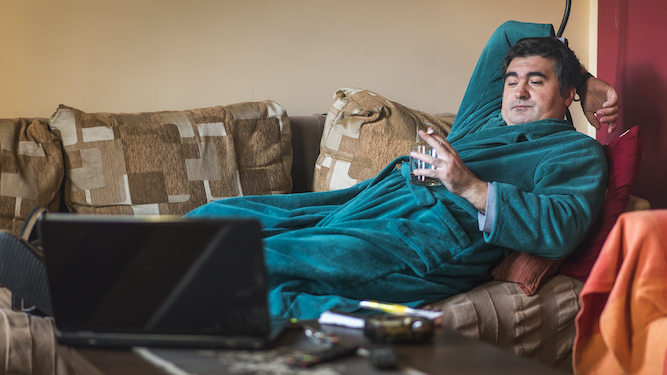 A MAN has managed to get completely shitfaced before getting out of his dressing gown for the third day in a row.

Joseph Turner started the day with a shot of whisky in his coffee and then cracked a can of lager at 7.45am in a bid to ‘keep the spirit of Christmas alive’.

Partner Sophie Turner said: “Since Christmas Day he’s been a man on a mission from the minute he wakes up. I guess if you only have a very brief period when morning drinking is allowed, you have to make the most of it.

“At breakfast he insisted on making Buck’s Fizz, again. I thought having some food with it might sober him up, but when I was clearing the table I realised he’d had Baileys on his Rice Krispies.

“He did eventually manage to dress himself, then sat down in front of the telly to watch a film with the kids and a large glass of wine. He’d passed out by 11am.

“I’ll let him sleep it off until dinner, and give whichever kid can throw a Nurofen Plus into his open, snoring mouth in the meantime extra Yule log.”