IF you’ve overindulged on Christmas Day, avoiding a hangover on Boxing Day will be a challenge needing a creative solution. Try these:

Hair of the dog

It’s not a hangover if you’re still drunk. Opening a bottle of breakfast Bailey’s will soon numb a headache or pause the nausea, and prepare you for a morning of incessantly beeping and flashing children’s toys spouting: ‘Let’s cuddle!’ in an annoying American accent.

Convince yourself it’s a virus

It can’t be a hangover. Do a Covid test. Sticking a swab down your throat will induce vomiting, meaning you have a stomach bug too, no doubt from mixing your cheeses. Better have a full English and a lie-down with the TV remote until the illnesses pass, probably when your partner suggests a round of cocktails.

Pre-book a hypnotist to convince you you don’t have a hangover on the 26th. You’ll still feel rough, but your brain won’t accept it’s a hangover. It may be a bit disconcerting to inexplicably projectile vomit whenever you nibble a Celebration or smell a turkey sandwich, though.

Jump in a pond

Before you have time to think, race to the nearest outdoor body of water and throw yourself in. Cold water, shock, adrenaline, and a lungful of algae will purge all traces of a hangover once your screaming and vomiting stops. However, consider whether it’s worth spending a day in A&E instead of just on the sofa.

A hangover could be the work of malevolent spiritual forces. Search the internet whilst drunk to find an online shaman that will rid you of such demons. The magic works the next day when the shock of checking your bank balance shunts your hangover to the back of your mind.

Drink lots of water and go for a run

If you’re considering this the chances are you’re not a runner. Drinking lots of water may help with dehydration, but going for a run with your belly sloshing around may cause an emergency evacuation of your stomach. Still, now you’re detoxed and can start again. After all, it is Christmas.

Six totally un-Christmassy things everyone does at Christmas now 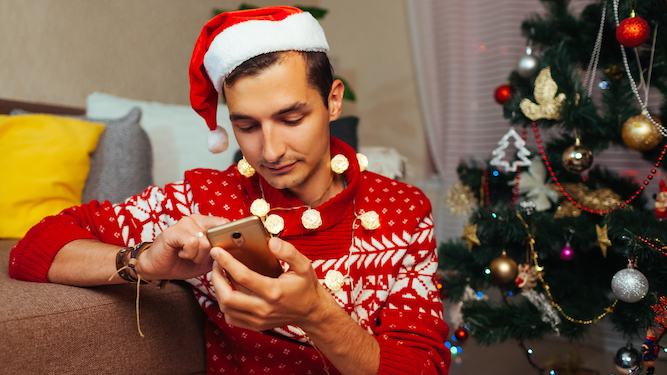 BACK in the day you played with Lego, ate leftover turkey and watched Where Eagles Dare. But Christmas has changed irrevocably, and here’s what you do now:

From 8am onwards, your phone’s bleeping constantly like a Guantanamo Bay psychological warfare op. Spend the bulk of the day replying to near-identical texts from relatives saying ‘Mery Xmas luv Pam & Gra’. They’ll all include a fir tree emoji, as if that suddenly makes them enormous fun.

Such a shame you can only see your in-laws, aunts and uncles and weird cousins by Zoom, when you used to not be able to see them at all. It’s better than driving to their funny-smelling house for inane and confusingly prejudiced chat, but it’s stil 45 awkward minutes of your Christmas.

Candy canes used to be unknown in Britain, but now you can’t avoid the light-up garden ornaments. Coca-Cola has tried to make a bloody lorry a Christmas tradition, of course. And there’s the Elf on the Shelf, a time-consuming little bastard and a supernatural all-seeing eye like Sauron.

Thanks to mobile phones the quest for Christmas bits and bobs need never end. ‘Found a Londis thats open!!!’ your partner will excitedly text. ‘Shud i get more stuffing 2 be on safe side?? Ice? Milk??’ By the time you’ve dealt with all this shit it’s January and you’re back at work.

Adult pantos spit in the face of the childlike innocence of Christmas, with Jim Davidson’s livestock-level smut or Charlie Drake leching over young female characters. However, if ‘Are you GOING DOWN in the woods today, Gretel?’ is the funniest thing you’ve ever heard, you’re in for a theatre performance as memorable as Olivier’s Hamlet.

Go to a Caribbean island