Your drinkalong review of 2020 with Daily Mash beer

THERE has never been a year more suitably paired with alcohol than this one, so the Daily Mash has joined forces with artisan beer wizards Northern Monk to produce our own pale ale.

Get a few cans in and follow the events of the year with our drinking game:

Donald Trump was justly yet pointlessly impeached, Harry and Meghan announced they were stepping back from Royal duties, and the UK left the EU. Drink for every time you said ‘Well, this is a low point. Hopefully this year’s uphill from here.’

While the nation stayed home and did Zoom quizzes, Dominic Cummings told us all that he was a good father, a key driver of Northumberland tourism and a keen amateur optician. Drink for every lockdown regulation you subsequently ignored.

Britain and the world cautiously reopen, allowing friends and family to see each other and the inside of a pub. Teenagers everywhere get completely made-up GCSEs and A-levels. Drink for every government U-turn.

Kids go to school for the first time since bloody March. The government celebrates by deciding to break international law, which is no problem because Trump’s into it and he’s going nowhere. Drink for every mole Johnson ineffectively whacks with a regional lockdown.

Back in lockdown, the UK is rocked by Trump’s election loss, the discovery of not one but three vaccines, and an unsettling sense of fear caused by good things happening. Drink for every 1,000 lorries queuing along the M20. 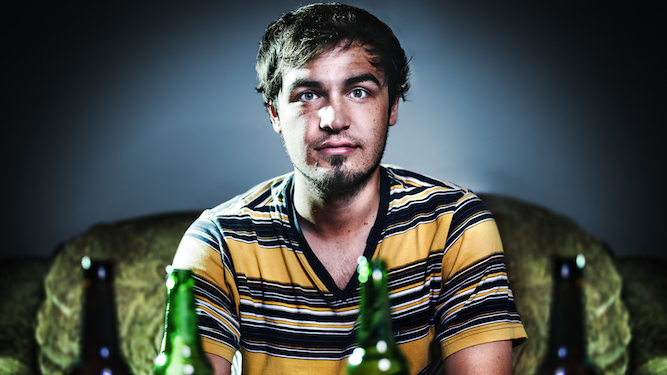 DO you knock back your weekly units solo in a night only to wake up hungover and guilty? Normalise one-man piss-ups with these single-player drinking games.

Never have I ever

Essentially the same as the regular version but far more efficient because you know all your deepest secrets. To the outsider it might look like you’re just swigging Malbec from the bottle while blurting out confessions, but actually you’re riding the bullet train to partytown.

A British take on the American high school classic. Get your drinks, arrange them in that triangle formation, then drink them in whatever order you want because you’re crap at throwing ping pong balls into red plastic cups and you’d be sober all night otherwise.

You’ve seen Thatcher make a hash of this game in The Crown, now it’s your turn to get in on the action. Grab a charred cork and nominate yourself every turn. Just don’t forget to dot your face with dibble ibbles while knocking them back or you’ll look a right weirdo.

A cross between a marathon and a sprint, this game is all about seeing how many drinks you can neck in an hour then breaking that record. You’ll likely pass out having soiled yourself by the fourth hour, giving you something in common with actual long-distance runners.

Sitting in front of the TV surrounded by empty beer cans

The most popular solo drinking game of all. As its name suggests, the aim is to sit in front of your television while accumulating a floor strewn with empty beer cans. The number of cans doesn’t mean anything although the game is more fun if you switch on the TV.