ADELE has announced that she is releasing a new album of heartbroken songs with which listeners can shed 30 pounds in just 12 weeks.

30, which is expected before Christmas, combines the singer’s defiant ballads of love turned sour with a diet and exercise programme which promises to give all her fans the new svelte Adele look.

“Song like Hurts So Much (Can’t Eat A Thing) and 5k Walks In The Rain will have listeners sobbing in empathy while subconsciously imitating me and watching their weight fall off.

“You’ll weep the pounds away and be in a size 10 by January, and that’s the Adele guarantee.”

The cover of the album will show Adele, shot in sepia soft-focus, wiping away a tear while holding out the waistband of a pair of her old trousers to demonstrate how much weight she has lost.

It is expected to battle for chart supremacy with Ed Sheeran’s new self-help album, I Became A Billionaire With Just A Guitar And No Discernable Talent… And You Can Too!

A step-by-step guide to pretending to enjoy a gig 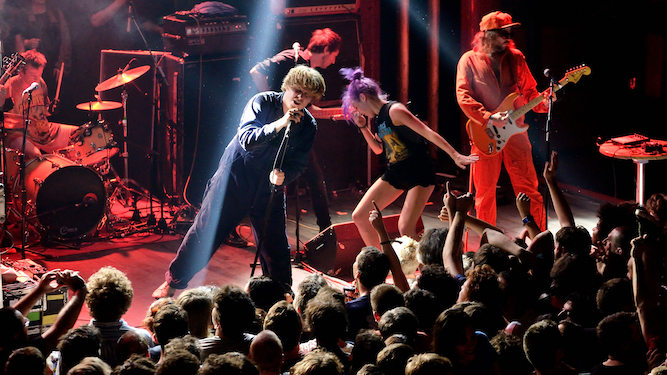 AFTER 18 months without live music, gigs have resumed but many people may have forgotten how to pretend that’s a good thing. Follow this guide:

Step one: With a sinking feeling, you realise that gig you said you’d have your mate’s spare ticket for is this week. You don’t want to go but are obligated, and it’s a night out and you’ve barely left the house since your nan’s 80th in August.

Step two: You listen to the band’s albums on repeat on the day of the gig so as not to look like a total bellend when surrounded by hardcore fans later that night.

Step four: You arrive at the gig to discover your mate wants a tenner for the ticket and for you to buy the first round, which is £14 for two pints of lukewarm piss-smelling lager in a plastic glass. Your nan’s 80th isn’t looking so bad now.

Step five: You forgot that bands have support acts. Many incredible bands started as support acts. You don’t know how because every support act you’ve ever seen is bollocks.

Step six: You decide where to stand: crushed at the front with the superfans where you can see something, or at the back behind a sea of upheld mobiles next to someone trying to get the lead singer’s attention by screaming non-stop.

Step seven: The gig begins. You listen to the music you don’t like and drink the lager you can’t afford while you’re occasionally showered with liquid from behind. It’s probably just lager but there are loud guitars so it could be urine. You’re again reminded of your nan’s 80th.

Step eight: Following the band’s only good song, the gig ends. You leave, deciding you’re too old for this shit and would rather be home in bed. You vow never to go to another gig.

Step nine: Your mate gets in touch and has a spare gig ticket. Why not? It’s a free night out.