Adele promises to be dumped by Christmas

GRAMMY-magnet dinner party wailer Adele has vowed that her current boyfriend will soon be song-inspiringly awful to her.

After announcing a five-year career break to ponder her baffling popularity, the singer was inundated with messages from distraught thirty-something women desperate for new songs to whine along to at 2am into the neck of an empty bottle of Pinot Grigio.

Now agent Nikki Hollis has struck a deal for Adele’s new boyfriend to begin treating her no good before the end of the month alongside a structured programme of being asked why he do her wrong.

A separation to allow Adele to think ’bout all the good times will be in place by June, allowing her to be stoically philosophical about the relationship by September and in the recording studio the following month to ensure a pre-Christmas album release.

Adele said: “While we’re currently very happy, my man will shortly walk out on me doing something that rhymes with ‘baby’ or ‘goodbye’.

“Meanwhile we have hand-picked a series of girls that my friends will say they saw him with and I’m going to spend the summer wondering why he told me so, so many lies.

“If anyone has any doubts as to which way this is going, I would remind them I have spent the last six months scouring online dating dates for a man called Brian Partbrake.”

Hollis has been the music industry’s foremost song-inspiring event engineer since 1997 when she introduced the Verve’s Richard Ashcroft to homeopathy. 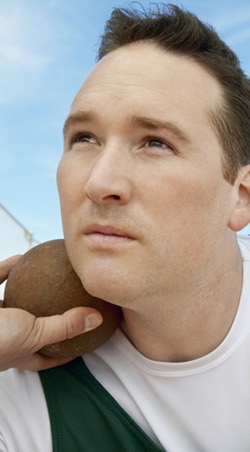 BRITAIN’S Olympians say they are training as hard as they can, within reason.

As diver Tom Daley’s coach criticised his protege’s work ethic, other Team GB members insisted they were giving at least 80 to 90 percent in their pursuit of glory.

Shot-putter Stephen Malley said: “I’ll only get one chance at this. Well maybe two or three chances, because I’m still young. I guess in four years’ time I can have another crack.

“This is serious, it isn’t a hobby. It’s a mixture between a hobby and a job. A jobby. Ha ha.

“Right, that’s enough, I’ve got to lift these heavy things like 20 times or something and it takes me ages.

Concerns have been raised that UK athletes are more concerned with their media profile but officials said the country would see the team’s committment during the E4 ‘scripted reality’ series, The Only Way Is Medals.

Synchronised swimmer Nikki Hollis said: “I play an exaggerated version of myself, juggling 5am training sessions and a bad case of chlamydia with a complicated sex life involving seven of Britain’s best hockey players.

“I might be a bit knackered for some of the events, which could generate some really good shouting matches between me and the coach.

“It’s going to be hot, sporty, and above all aspirational.”