The books, which are selling out on Amazon in a tacit admission that the higher brain functions of the UK are dead forever, have left frustrated grown-ups beating their own crotches with handfuls of felt-tip pens.

Nathan Muir, from Chester, said: “I know what ‘adult’ means. It means tits.

“I’ve been tricked into admitting I’m a halfwit without even being rewarded with cursory genital stimulation, and I’d wasted money on six shades of flesh-coloured pens.”

“They can colour in a fucking heron and like it.”

Professor bets he can turn SNP MP into a gentleman 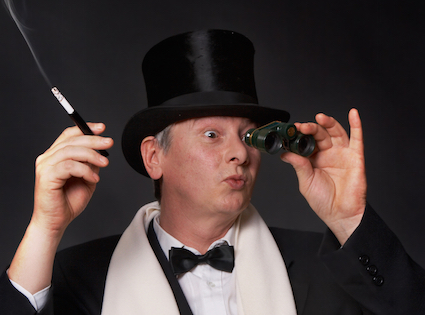 A PROFESSOR has entered into a wager that he can make a Scottish National Party MP pass for a gentleman.

Professor Henry Brubaker has bet his friend Sir Thomas Logan the sum of fifty guineas that in one month he can introduce MP Bill McKay into London society.

He said: “Upon hearing William’s rough tones I venture he is from the lower half of Shettleston Road in Glasgow’s utterly ghastly east end.

“William will receive lessons in elocution, deportment and basic cutlery. I shall enhance his diction with my tried and tested phrases including ‘In Hertford, Hereford and Hampshire, hurricanes hardly ever happen’ and ‘the rain in Spain stays mainly in the plain’.

Bill McKay said: “Ah don’t know about Hampshire and aw that fuckin’ shite, but ah’ve been to the Costa Brave nine fuckin’ times and not fuckin’ once did it rain in the fuckin’ plane.

“How the fuck can it rain in a plane, ya fuckin’ stuck up English wank?”

Professor Brubaker added: “Fifty guineas is what, about sixty quid? Can you wait until I get paid?”