BBC Stars 'Obviously Paid Too Much'

ANY moron can see that Jonathan Ross and Chris Moyles are paid far, far too much, according to a major review of BBC salaries.

The report, commissioned by the corporation's governing body, the BBC Trust, said in some cases the stars would not be able to earn any money at all if they did not work for the BBC.

The review was launched after the BBC ran adverts threatening to throw people in jail unless they contributed to Ross's £6 million annual salary.

The report stated: "Chris Moyles is exactly the sort of bumptious prick you could meet any day of the week in a Leeds boozer.

"If it wasn't for the BBC he'd be selling fags out the back of a van and getting his head kicked in three times a week."

The report also described Ross as 'one of this country's leading jumped-up researchers with a dirty mouth'.

It added: "If he was working at ITV he'd be booking guests for the Jeremy Kyle show and would be known round the office as 'annoying Japanese cartoon guy'."

Trust chairman Sir Michael Lyons said: "If these salaries are the result of the market, then the market is obviously fucked."

But the BBC defended its stars, insisting Jeremy Paxman could earn at least £940,000 a year treating people like shit on Channel 4.

Terrorists Can Hold Their Breath For 41 Days, Claims Brown 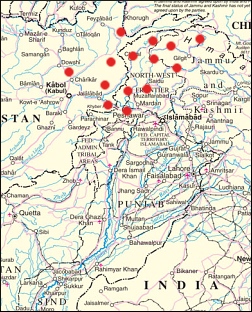 GORDON Brown has quashed a backbench rebellion over the detention of terror suspects after revealing that terrorists can hold their breath for exactly 41 days.

The prime minister said detention for anything less than 42 days was pointless as the terrorists would simply take a big gulp of air, sit back and smile.

Mr Brown said: "Thousands of radicalised young men are travelling to training camps in Pakistan or Afghanistan where they are taught how not to breathe.

"These fanatics then return to the UK where they plan atrocities safe in the knowledge that their breath holding skills are more than a match for British justice."

An MI5 source said: "We've tried sticking their heads under water for absolutely ages. You may as well give them a cup of tea and a newspaper."

But Tom Logan, a terror expert at the Institute for Studies, said: "The prime minister keeps saying there are 2000 active terrorists in the UK, engaged in 30 active plots.

He added: "Maybe I'm being a bit dim, but if you can count them then  – surely to Christ – you can arrest them?"