THE BBC has unveiled plans for a three-part mini series based on this morning's earthquake in Lincolnshire.

Starring Ross Kemp, as Kenny Ross, a troubled, Iraq war veteran, the £200 million production will be the centrepiece of the corporation's summer schedules.

A BBC spokesman said: "Everyone remembers where they were when they heard about the Lincolnshire earthquake.

"Families were torn apart and some the county's best chimneys were ruined. This amazing production will explore the heart-wrenching human dramas which will hopefully emerge sometime later today."

As the quake hits Market Rasen, Kemp's character is seen drinking vodka from the bottle and looking at photos of old comrades from Basra.

He then begins an incident-packed, 45-minute journey to the centre of Grimsby where he helps lift some bricks off an old man's legs. 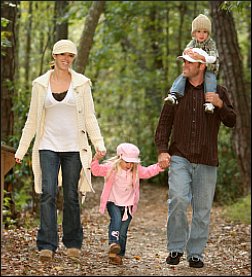 THEY are portrayed as a haven for families, but beneath the idyllic, tree-lined surface, Center Parcs are teeming with paint-balling gangs of would-be terrorists, it was claimed yesterday.

The High Court in London heard how Jihadist recruiters set up a network of training camps from Wiltshire to the Lake District, disguised as family holiday villages offering week-long breaks from as little as £279.

Terrorism expert Dr Tom Logan said: "Most people thought they were just a posh Butlins, but there was obviously something deeply sinister going on."

He added: "They took their inspiration from the CIA who have been running Disney World since the mid-70s."

Center Parcs dismissed the claims and insisted it was looking forward to a busy summer season of bike rides, watersports and anti-American volleyball competitions.

A company spokesman said: "During the day you can swim, ride horses or play tennis, and in the evening you can relax with friends and talk about the infidel's occupation of Jerusalem.

"Look at the choice on offer in our main restaurant and bar and give praise to Allah."

He added: "While this may look like an incredibly accurate and detailed recreation of the security area at Heathrow, it's actually the spa."