BBC urged to stop apologising to every single weirdo

THE BBC needs to stop apologising every time some oddball writes a letter, it has been claimed.

The world’s most respected broadcaster issued an apology for offence caused by Holly Willoughby’s clothing on The Voice, after complaints from just over a thousandth of one percent of the show’s 7.5m viewers.

Professor Henry Brubaker, of the Institute for Studies, said: “Somebody has to read the complaints and then several people have to have a meeting about the complaints.

“Then some emails go back and forth and then the statement has to be drafted, and then approved by several layers of management. And then the press office has to issue the statement and deal with follow-up enquiries from the media.

“Because about a hundred fruitloops think Holly Willoughby is a prostitute.

“That is your money that is being spent on responding to a complaint about a dress.”

Media analyst Julian Cook said: “The fact the BBC makes The Voice is horrible enough. To spend even more of our money responding to complaints about it is basically theft.

“The BBC was much better when it just carried on regardless. No focus groups, no witless commissioning editors and absolutely no apologies. Just David Attenborough and Dennis Potter doing their thing and then saying, ‘oi, watch this you fuckers, you might learn something’.”

He added: “People are idiots and the BBC needs to start ignoring the absolute shit out of them.” 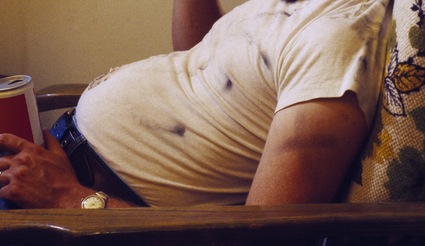 WHITE t-shirts do not make men 12 per cent more attractive if they have quite a lot of food stuck to them.

Researchers found that the ‘white t-shirt effect’ only applies to ‘supermen’ who can eat a meal without getting it absolutely everywhere.

Nathan Muir, from Peterborough, said: “So I was wearing my white t-shirt when I went up to this girl in the pub and she was disturbingly unimpressed. I looked down and noticed that I was also wearing some rice, some green chilli and a few surprisingly large pieces of chicken.

“I started to pick the bits off and eat them, but that seemed to make things worse.”