BEAR Grylls’ latest challenge is to live in London while earning £12.50 an hour.

The survival expert is filming a new Channel 4 series in which he attempts to survive equipped only with an average income and a ‘studio flat’ in Clapham.

Grylls said: “Once I’d paid my £1,300 rent and put some money on my Oyster card there was nothing left for food, so I set a snare for my neighbour’s cat and cooked it in the sink.

“Tomorrow I’ll set up some Polynesian bird traps on Clapham Common, so at least I’ll have some sparrows to put in my sandwiches.

“I need some new shoes too, so I’ll cut down a tree and hope no one notices I’m wearing crude wooden flip-flops.”

He added: “I can’t afford to do anything except stay in and worry about money, which is really depressing when you’re meant to be doing all the stuff in Time Out.”

Grylls also revealed that his SAS ‘escape and evasion’ skills had allowed him to outwit Tesco security staff while stealing toilet rolls. 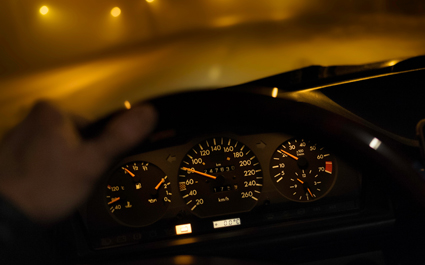 A 45-YEAR-OLD man has turned on his fog lights in the manner of a spy triggering an under-bonnet machine gun.

Sales representative Tom Booker was driving to a client appointment in Taunton when he hit a patch of fog.

He said to himself: “You may think you’ve got the better of me, Mister Mist, but I’ve got a little surprise up my sleeve.”

Booker then pressed a button just above his car’s ashtray that made the slightly brighter lights come on.

Father-of-two Booker said: “Whether you’re being chased by rogue KGB agents, or just driving on a B road in conditions of restricted visibility, it pays to have a hi-tech ’ace in the hole’.

“In my mind the little switch with a picture of a wavy line on it makes bullets come out of the car. It’s a good job it doesn’t though, because that would cause an accident.”