JUSTIN Bieber fans are today debating if they would still like the Canadian superstar if they were hiding from Nazis in an attic.

After Bieber speculated that teenage diarist and Auschwitz victim Anne Frank would have been a fan, young girls have questioned whether, faced with the daily threat of death, they would prefer Bieber, One Direction or being as quiet as possible, all the time.

Fourteen year-old Nikki Hollis, from Stevenage, said: “Did they have headphones under the Nazis? If so then yes, I would have listened to Justin, but I would not have sung along because Auschwitz sounds really bad.

“Also, I don’t think Anne Frank and her friends had internet so we would have had to write very short letters to each other about Justin.

“And I’m guessing that the post office back then took ages, so by the time we had exchanged five or six letters I’d be really into Bruno Mars, or escaping to England.”

Hollis’s best friend, Sara Thompson, added: “If I was being hunted by the Gestapo I would probably need something to cheer me up. Justin is not just a great singer, he’s also really funny and warm.

“I just wish he had been able to meet Hitler.”

Historian Julian Cook said: “Anne Frank’s diaries reveal an insightful, imaginative and intelligent young girl who was also very normal and so I think she would have started off as a Belieber before becoming one of Lady Gaga’s ‘little monsters’.”

Fifteen year-old Emma Bradford, from Peterborough, added: “Who the fuck is Anne Frank and why is she having a go at Justin?”

Thatcher wigs sell out across UK 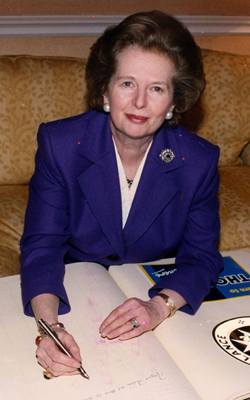 ARDENT Thatcher fans are snapping up replicas of her famous hairstyle.

The wigs, which reproduce Baroness Thatcher’s signature bouffant, will be worn along the route of her funeral procession, lending the event a sense of sober dignity.

They are available in Grantham Blonde, True Blue and the silver-wire Steely Resolve.

Political analyst Roy Hobbs said: “Having weird hair was absolutely key to Thatcher’s success, as it gave her a memorable silhouette. In this sense she was the Russell Brand of her day.”

Baroness Thatcher’s public hairstyle was itself a wig. Her real hair was cut in a playful, boyish style like Mia Farrow’s in Rosemary’s Baby.

Former staff have revealed how her wig was kept in a Family Circle biscuit tin under the bed.

Housekeeper Emma Bradford said: “Apparently Baroness Thatcher found it when she was just a little girl. She was out riding her bike near a cursed pagan burial mound and it was hanging in the bushes.

“Animals wouldn’t go near it.

“At night I would brush it down and replace it in the box. I swear sometimes I would hear it moving about in there, hungry and desperate like a trapped mongoose.”