THE government has introduced compulsory Masterchef participation for benefits claimants.

Following Tory concern about culinary standards among the poor, anyone failing to reach the semi-finals of the television cookery show will have their dole stopped.

Duncan Smith said: “Claimants should not be wasting money on ready meals when they could easily rustle up some seared duck foie gras with a drizzle of white truffle oil.

“If they cannot impress calorie hoover Greg Wallace enough to make it through to doing the lunch service at a fancy restaurant then clearly they are not trying.

“I mean, all you have to do is put something in a steam bath and serve it with pea puree. Nick Clegg could manage that.”

Unemployed graduate Donna Sheridan said: “Iain Duncan Smith hasn’t got a clue what it’s like to apply for 15 jobs a day while making line-caught sea bass with chanterelles and lapsang souchong jus.

“On the plus side, it is an opportunity to drop something hot in Jay Rayner’s lap.”

Reading about drugs made Ed Miliband have a whitey 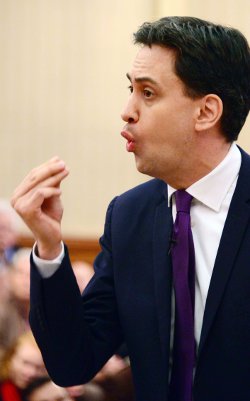 ED MILIBAND thought his face was melting after reading about the effects of drug use for the first time.

“I thought I’d turned into a snowman”

The Labour leader had agreed to recreationally research illegal substances with shadow cabinet colleagues after agreeing that nobody would do anything stupid like allowing it to influence policy.

Tristram Hunt said: Someone had passed him the report on cannabis reclassification and hed been holding onto it much too long.

He could hardly speak and when he did it was utter nonsense like less harmful than alcohol, huge tax yield and put that Caribou album on again.

I took him to the toilet, where he spent two hours vomiting and saying ‘don’t let my mum see me like this’.

Miliband said: I was in a haze where outlandish visions of thriving urban farms and reduced prison numbers swam before me singing the old Shake ‘n’ Vac song.

I plan to tour schools scaring children straight with the terrifying story of my real-life second-hand drug experience. It will mean so much more coming from someone they respect.