Big Brother House To Include Room Full Of Man-Eating Tigers

THIS year's Big Brother house is to include quirky new features including a toilet in the middle of the livingroom floor and a room full of tigers.

The compound, at Elstree Studios in Hertfordshire, has been described as "topsy turvy" with beds nailed to the wall, a fridge at the bottom of the garden and a beanbag instead of an oven.

But the producers admit the the most controversial aspect will be the six ravenous, 30 stone, man-eating Bengal tigers, housed in a room marked 'chocolate storage area'.

A Big Brother spokeswoman said: "Just imagine the looks on their faces when they go searching for Cream Eggs and find themselves staring down the barrel of a 10 foot long killing machine.

"Instead of a weekly eviction, we think the housemates should nominate each other to spend 20 minutes alone and unarmed in the 'chococlate room'. Just kidding. Or are we? There's only one way to find out."

Most tigers live in forests or grasslands, for which their camouflage is ideally suited, and where it is easy to hunt prey that are faster or more agile. Tigers hunt alone and eat medium to large sized herbivores including deer, wild pigs, water buffalo and receptionists.

The spokeswoman added: "The livingroom toilet will be a challenge, but what a great way to get to know each other.

"And after complaints from viewers we've recognised that the Diary Room was not lethal enough, so this year the walls will close-in if a housemate becomes too boring or starts crying.

"Oh yes, and the garden fridge is full of wasps."

Salmond To Generate Electricity By Rubbing Himself Against Shereen Nanjiani 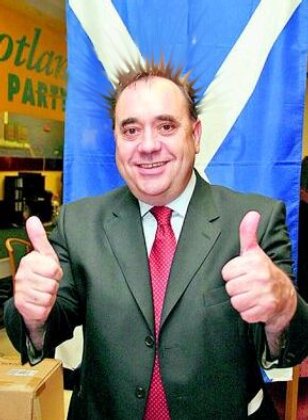 FIRST minister Alex Salmond plans to satisfy the nation's energy needs by rubbing himself against a variety of high profile Scots.

Following the Executive's decision to oppose nuclear power, Salmond and his cabinet have focused on the search for cheap, clean alternatives.

The First Minister has now thrown his weight behind the strategy after a successful demonstration at Bute House yesterday, during which Salmond rubbed the top of Nicola Sturgeon's head.

The Scottish Cabinet is now convinced that vast amounts of static electricity can be generated at a community level and then stored in huge underground tanks attached to the National Grid.

The First Minister said: "If this country is to be nuclear-free it will require a great national effort, involving wind, wave and rubbing. I am prepared to give up two hours of my day for some very vigorous rubbing. Are you?"

Salmond has written to a host of Scottish celebrities, including BBC personalities Shereen Nanjiani, Jackie Bird and Brian Taylor, and business leaders such as dairy king Robert Wiseman and Anne Gloag of Stagecoach, asking them to come to Bute House for tests.

Golfer Colin Montgomerie is considering a request while Sir Sean Connery has given the project his blessing but declined to take part as he believes he is too old.

Salmond hopes thousands of other Scots will volunteer as power generators, using their spare time to rub themselves against friends, neighbours and colleagues.

According to researchers at Dundee University, the most efficient form of rubbing is back-to-back while wearing man-made fibres, though scientists are working on a pair of special gloves which will increase output by up to 30%

Dr Henry Brubaker, who perfected the rubbing technique, said: "It's quite tricky at first; you really need to find someone who is roughly the same size, or much much larger. But once you get the hang of it you'll find that it's unusually pleasant."