TORY leader David Cameron last night vowed to double-check the ages of all artists mentioned in speeches by the prime minister.

Gordon Brown was humiliated in the Commons yesterday as Mr Cameron exposed his 'litany of lies' about how old Titian was when he died.

During angry exchanges, Mr Cameron said: "You told us Titian died aged 90, when the truth is he died aged 86. Why haven't you resigned?"

And as the Bank of England predicted the worst recession since the dinosaur asteroid, Mr Cameron added: "This is the sort of prime minister who will tell you that Constable died in childbirth at the age of 78, just for the sake of a few votes.

"In fact, Constable died from indigestion aged just 60. As for Rembrandt – 63 not 14. El Greco – 73 not 173. And JMW Turner, who captured the beauty of the Venetian canals, was 74, not 75 as this government's pointless VAT cut would have us believe."

To opposition taunts of 'how old was Michelangelo, you jowly Scottish prick?' Mr Brown said: "Across the world governments are following our lead and making a rough guess about how old Titian was when he died."

Bank Bosses Urged To Stick Apologies Up Their Arse 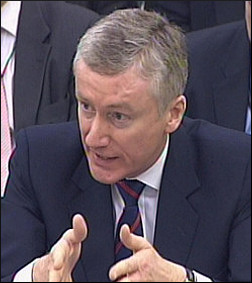 THE former bank bosses blamed for kick-starting the worst recession for 100,000 years were last night urged to take their apologies and ram them so far up their back passages their heads will pop off.

The ex-HBOS and RBS executives told a Commons committee they were sorry about all the bad things that had happened, insisting the only thing that had kept them going during this stressful time was their enormous, untouchable wealth.

But, they claimed, they had also been victims of the financial crisis having lost so many of their favourite pounds.

Close to tears, Andy Hornby, the former head of HBOS, said: "In the last two years I have lost more pounds than I earned in salary. These were some of the finest, most decent pounds I have ever worked with. They were my best friends."

A clearly distraught Sir Fred Goodwin, the former RBS chief, showed the committee a photograph of his favourite £10 note, lost during a particularly greedy and stupid deal last March.

He said: "I sent it off to be part of some dodgy credit default swap arrangement, fully expecting to see it again a few days later.

"But at around 4pm that day I got a phone call saying it – and 250 million of its little friends – were gone. I fell to my knees, clutching this photograph and weeping like a grandmother."

He added: "I'll remember his strong, square edges and his picture of Charles Darwin looking at a hummingbird. He was the best £10 note a man could have wished for."

Committee member Tom Logan said: "Between you, you've banked seven figure salaries, you have enormous pensions and you will live in total luxury for the rest of your lives, while the hopes and dreams of millions have been shattered.

"Thank you for coming here today and I only wish there was a seething mob outside with a can of petrol, a large wooden stake and a box of Swan Vestas."