Carrie Symonds to do Strictly and shag dancer

CARRIE Symonds is to appear on Strictly Come Dancing, last until the semi-finals and have a torrid affair with her dance partner, she has confirmed.

After reports that the hit show is eager to sign her up, Symonds will go on it to earn a much-needed £40,000 to buy a side table, improve her PR and enjoy hot sex with an attractive, well-muscled gentleman.

A friend said: “Strictly curse? More like a Strictly blessing.

“Carrie’s a PR genius, as she’s amply demonstrated during her time in Downing Street, and she’s aware that sleeping with Johnson is damaging perceptions of her hotness.

“So she’s planning to strut her stuff in spangles on the dancefloor while making it perfectly obvious she’s doing the horizontal tango offscreen. She fancies Aljaz for that, but any of them would do.

“In week one she’ll do the foxtrot and be pictured kissing him in a London bar, in week three it’s a Viennese waltz and leaving a hotel, by week six it’s the Samba and being caught mid-coitus in Downing Street.

“Boris? He’s fine with it because for reasons no one understands it will all just make him even more popular.”

Each other: The boring things new couples find f**king fascinating 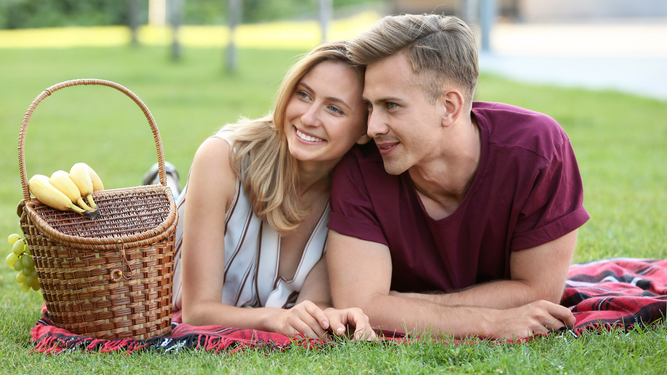 NEW couples are notorious for turning people’s stomachs with their displays of affection and zest for life. Here are five dull as ditchwater things they somehow find fascinating.

New couples will soppily gaze up at this big space rock together as if it contains the meaning of life. If, as in the song, the moon did literally hit their eyes like a big pizza pie it would serve them right, although be catastrophic for humanity.

Walks on the beach

If you’re not loved-up then a beach is just a place to get sunburnt while eating an ice cream and tutting at the litter, but for new couples they’re an oasis of romance. As they walk along with the tide lapping at their ankles, you just know they’re thinking of riding horses together while wearing billowing shirts. Sickening.

Going to a spa

Most of society has realised that going to a spa is just a hideously expensive way of doing nothing for a bit. However, freshly minted couples are so blinded by infatuation they’ll convince themselves that getting their toenails gently filed down is the height of fun, the deluded morons.

Normal people tend not to eat on a blanket in the park because of hassles like lugging a load of cold food there and seagulls trying to steal your potato salad. New lovers are in their own little world, so don’t even notice the dickhead aggressively playing with his dangerous dog nearby, or that it’s suddenly turned nippy after 20 minutes and you have to go home.

Even though they’ve only got boring anecdotes and dull facts about their life to share, new couples think their partner is the most interesting person on the planet. The interest normally fades when the novelty of shagging has worn off or they receive a flirty Tinder message from someone just as boring but a bit hotter.