The producer of Sex Box said: “Pornography has made sex seem somehow dirty or titillating.

“But what could be more natural and healthy than two people having sexual intercourse in a cube?”

36-year-old Tom Booker said: “My personal interest in the reproductive act is purely scientific. Thus far my research has focused mainly on the topic of ‘big naturals’.” 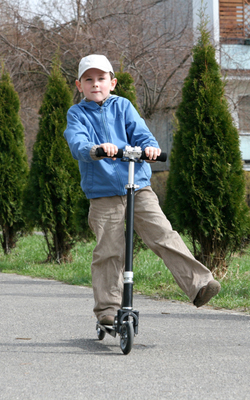 SCOOTER-RIDING youngsters have made pavements no-go areas for pedestrians, it has emerged.

New data shows a 243% increase in ankle injuries over the past twelve months, with many pedestrians describing a constant sense of menace.

Office manager Mary Fisher said: “The scooterers are generally less than three feet tall, which makes them especially dangerous as they are below one’s eyeline.

“They are constantly lurking on the lower depths of the pavement, like little Ribena-fuelled U boats.

“They operate outside of parental control, firing themselves alongside the pavement while building up enough momentum to snap a shin bone.”

Professor Henry Brubaker of the Institute for Studies noted that scooter brands are called things like Destroyer, Pulveriser and Massive Pain In The Arse.

He said: “Post-apocalypic stories have often described a future dominated by biker gangs. Actually it will be little mutant kids on scooters, who floor people and then ride off laughing.”

Six-year-old Tom Booker said: “We scooterers live by a strict code of conduct – to be as annoying as possible at all times.

“You can come on the pavement if you want but you have to give us 5p.

“And if you tell us to ‘watch it’ we’ll burst into tears and make you feel really guilty.”