Wen Jiabao, the Chinese Premier, ordered the state police to stop blocking the BBC news site after discovering it was mainly obituaries of obscure music hall stars from the 1930s.

He said: "I though it hard hitting news site but it just load crap about pets. Front page story is donkey that do ballet. Donkey? Last week all about squirrels who is fat.

"I read about horse in lift. Elephant with camera. Cat that go hitch-hike. Deep fried rat. What next? Dog has shit?

"Who is Binky Blenkinsopp? She tap dance for 12 hours non-stop at Bradford Alhambra in 1936. Apparently. Die in nursing home surrounded by friend. Who cares?

"I read Chinese website after we shoot family of reporter, just in case, and take all good bits out, and it still have more news in than this.”

Yen Xiao, a farmer in Jiangsu province, said he had rushed home from the paddy field when he learned the BBC news website was now accessible but found it a huge disappointment.

He said: "I have nice shredded duck for tea, with boiled rice and nice fresh pak choi. But when read BBC internet I find it all give me cancer.

"If OK with you, I stick which BigTittedLezzieFunGirls.com." 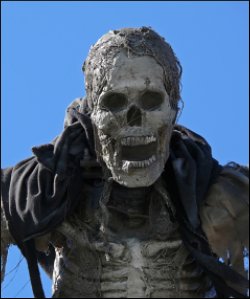 THOUSANDS of buy-to-let investors are ageing 1,000 years in around four seconds after receiving the latest valuations of their rented properties.

Nikki Hollis, said her husband Tom crumbled to ashes at the breakfast table shortly after opening a letter from his bank.

She said: "He kept telling everyone we were loaded because he'd bought ten flats on the never-never and the daft sods who were wasting their money renting them would make us into millionaires.

"He opened the letter and his face started to crumple. I thought he was crying, but he was getting more and more wrinkled. Then his hair went all long and white, then he was just a skull, and then he was gone.

"Turns out we owe the bank £1.5 million, even after I've given them our house. They say I should go on the game. It's alright for Tom, he's in a jar."

Cathy Smith, 36, said her husband Keith dissolved like 'one of baddies at the end of Raiders of the Lost Ark' after taking a phone call from his bank.

"He was laughing at first, saying 'just take the keys and have the bloody flats back, they're more trouble than they're worth'.

"Then they told him they were taking the house and all our savings. Four seconds later he melted into a brown puddle on our lovely John Lewis rug."

She added: "Keith said buy-to-let was perfect for people like us with no knowledge of the property market. Now all I've got left are his teeth."