JEREMY Clarkson has split into two separate entities – one sad, the other mocking.

The biological miracle occurred after Clarkson retaliated against Twitter comments joking about the death of his dog, triggered by his own posting of the sad news.

Having read through his own furious Top Gear magazine column responding to the jibes, Clarkson went to bed confused that he himself was now an example of political correctness gone stark raving mad.

The following morning he woke to discover his verruca had grown into a perfect physical clone of himself, Clarkson 2, and split from his original body.

A spokesman for the presenter said: “Clarkson 2 is kind and sensitive, he embodies Jeremy’s human side.

Clarkson 2 posted on Twitter: “Still sad, am on Spotify listening to songs about best friends.”

Original Clarkson responded by mocking Clarkson 2 in his newspaper column, writing: “I like dogs as much as the next Englishman, but like humans of various nationalities they have no souls.”

Qualifying his incendiary headline-grabbing remark, Clarkson continued: “My real problem is with the professional grief junkies like other me, trumpeting their mutt-induced tears on Twitter – an imaginary club house for perverts and mouth-breathers. And God forbid we respond to their worthless emotions with the humour that makes this nation great – the lefties will pounce.”

Clarkson 2 responded on Twitter: “Why am I being so mean to me?”

Nikki Hollis, media analyst at Donnelly-McPartlin, said: “It’s perfectly legitimate to grieve for a pet, but posting about it on Twitter so that you can get attention from strangers is likely to attract antagonism, especially if you are a professional antagonist.

“This whole thing is toughest on Richard Hammond, he doesn’t know whether Clarkson or Clarkson 2 is his pack leader. He’s running around in circles, barking helplessly.”

Big Brother celebrities arrive, unaware that one of them is a murderer 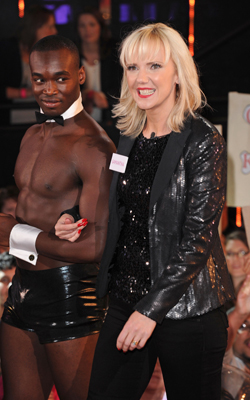 Martin Kemp, formerly of Spandau Ballet, discovered Clary slumped in the Diary Room with a carving knife protruding from the camp comedian’s back.

After failing to find a pulse in Clary’s neck, Kemp said: “He’s dead. Somebody killed Julian.”

In a unique twist on the format, one of the housemates is a psychopath and a celebrity will be killed each week until the killer is either unmasked or voted out by the public.

Several of the housemates have already pointed the finger at So Solid Crew member MC Harvey.

Housemate Samantha Brick said: “He’s from East London, they kill each other there without even thinking about it, it’s just like getting a KFC to them.

“Julian probably made a double entendre and he just snapped.”

Mike ‘The Situation’ Sorrentino from Jersey Shore, who is exhibiting surprisingly strong powers of deduction, replied: “That motive doesn’t stack up. MC Harvey faced widespread press criticism after he cheated on Alesha – he could handle a few cock jokes without resorting to violence.

“Also if you look at the angle of the blade, the murderer was left-handed. MC Harvey is right-handed.”

Julie Goodyear, who was in Coronation Street, said: “I don’t care who did it, we’re going to be in this house together for weeks so we all need to stop doing murders and start getting along.”