STEVE Coogan fans were dismayed last night after it emerged the actor is one of those people who has an opinion about Top Gear.

Writing in the Observer, Coogan went on about Top Gear for ages as legions of horrified admirers begged him to not care about it in the slightest.

Tom Logan, a grade nine Coogan fan who knows all the words to the jockey sketch, said: “I kept hoping he was just being ironic and zeitgeisty and would soon segue into something about multiculturalism or Fox News.

“But he just kept going on and on about Top Gear. It was almost as if he was trying to get me to have an opinion about it as well.

“After a few minutes I noticed the tears that had been cascading down my cheeks and dripping onto the newspaper.

“And then, as if he had left me a voicemail to tell me that he never really loved me, he started having an opinion about their clothes.”

But some fans said it was vital that someone like Coogan had an opinion about Top Gear and the manner in which it should be funny.

Helen Archer, secretary of the Finsbury Park A-ha! Society, said: “Steve has worked with some of the greatest names ever to be picked out of a hat by a BBC commissioning editor, so he is much more qualified than you to decide what you think is funny. How can you not see that?

“That said, I would have preferred it if he had told me whether I think Frankie Boyle is funny.”

Coogan also revealed that he does not like magazines that are about cars as much as he used to.

Lies about plastic surgery up 39% 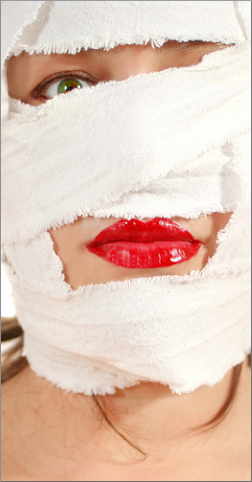 LAST year saw a record increase in the number of obvious lies about embarrassing surgery scars.

Britain’s cosmetic surgery industry said it had cut open 39% more customers who then came out with some bullshit excuse for why they look like a fish.

Liz Wade, 33, from Stevenage said: “I’m happy with the way I am especially as all this cold weather has made by boobs bigger and firmer.

“And I got this long red mark behind my ear when a gang of sparrows stole the potato peeler out of my hand and then attacked me with it.”

She insisted: “All my family start to get younger when they hit their mid 30s. We’re like Benjamin Button except we have a lot of freak accidents resulting in tiny scars.”

The results also show men are 20% more likely to lie about going under the knife than women. Professor Henry Brubaker, of the Institute for Studies, said: “Men have been secretly experimenting with all kinds of excuses for everything from nose jobs to face lifts in a secret bid to alleviate their awfulness.

“Actually, I recently discovered that keeping my two wallets in my top pockets made me look like I had moobs.”

He added: “I now keep my wallet in my trouser pocket and yes it is shaped like a surgically-enhanced, flaccid 10-inch penis.”