Corden opened his first show with a montage of him stroking the genitals of some famous people who are all now his very close friends.

He then told Mila Kunis and Tom Hanks how much he and Simon Pegg loved their work, while they promoted their mediocre films and wanked on a sofa while giggling. 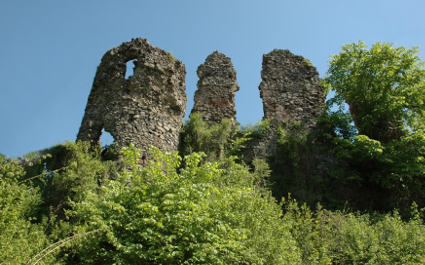 THE ruins of a secret Nazi fortress have been discovered in suburban south-east London.

The stone remains were identified by fragments of a souvenir plate showing Hitler petting his many dogs and a faded architect’s plan bearing the words ‘Snooker room here – swastika-themed?’

Historian Julian Cook said: “It would seem that the Third Reich planned, in case of the failure of the war on the Eastern Front, to move to the suburbs and blend in.

“The grandiose castle facade designed by Albert Speer might seem ostentatious, but makes perfect sense when you see how they go in for stone cladding around here.

“Goebbels planned to commute to the City, Goering was halfway through his solicitor’s exams, and apparently Hitler was going to give himself a few years off because he’d been non-stop since 1924.”

Mayor of Bromley Eleanor Shaw said: “Given Bromley’s transport links to London and abundant green spaces, it’s no wonder that the genocidal monsters of the Nazi regime thought it would be an ideal place to lay low.

“Although ultimately they had no need of the fortress as Lewisham offered them full political asylum in return for rocket-building technology.”