ALL couples who watch Jools Holland’s BBC2 New Year show will separate at some point before March, it has emerged.

The Institute for Studies questioned 5000 newly single people, and discovered that all their relationships fell apart after viewing the programme.

Each respondent reported a deadening sensation between the legs during the show and an overwhelming sense of ennui when the broadcast had finished.

He said: “We’d been together for three years and were having it off constantly.

“She was keen to go to her mate’s New Year party, but I couldn’t really be bothered so persuaded her to stay in and watch Jools’ Hootenanny with a bottle of Ballycastle.

“As soon as Jools started gladhandling Brian Ferry, I was overwhelmed by a certainty that I’d never have sex with her again.

“Then as the Big Band were tuning up for a jazz riff, she told me I ‘smelled of burning nylon’ and moved to the opposite end of the sofa.”

Francesca added “I wanted to spend the rest of my life with Stephen. But it was only through watching Hootenanny that I had any idea how endless and unbearable a lifetime could be.”

Stephen says that he and Francesca still plan to attend the Squeeze reunion concert that they bought tickets to before the end of their relationship.

He said: “We’re both massive fans.” 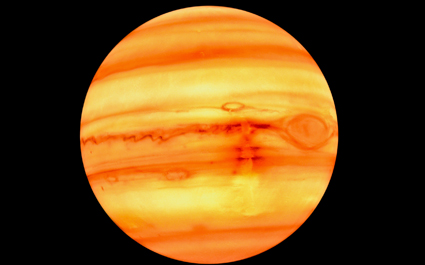 THE planet Jupiter no longer exists, in accordance with Mayan prophecies.

The Mayans had famously predicted ‘the end of the world’ on 21/12/12, but only the most eagle-eyed scholars noticed that they didn’t specify which world.

Jupiter flicked out of existence at precisely 11.11am.

Doomsday believer Tom Booker, who had just burned all his possessions to appease the gods said: “Ah. I feel really stupid now.”