Daenerys just wanted Westeros to honour the result of the referendum

THE Mother of Dragons from Game of Thrones has explained that she only wanted the Seven Kingdoms to respect the result of its recent referendum.

Daenerys Targaryen, First of her Name etcetera, said that while she regretted any distress she and her dragon may have caused on a recent campaign visit to King’s Landing, honouring the referendum was foremost in her mind.

She said: “There’s a lot of fuss in the press but what I heard being screamed from the doorsteps was that whoever the people may have backed for the Iron Throne at the time, they just want us to get on with it.

“‘Stop shilly-shallying with the White Walkers, stop these petty disputes about who is ‘King in the North’ and let’s fulfil the will of the people, which is rule by House Targaryen.

“Don’t let arguments tear our countries, and our cities, apart. This isn’t about me and frankly it’s offensive to suggest it is. I’m just standing up for democracy.

“Let’s deliver on our promises and make the Seven Kingdoms a realm we can all be proud of.” 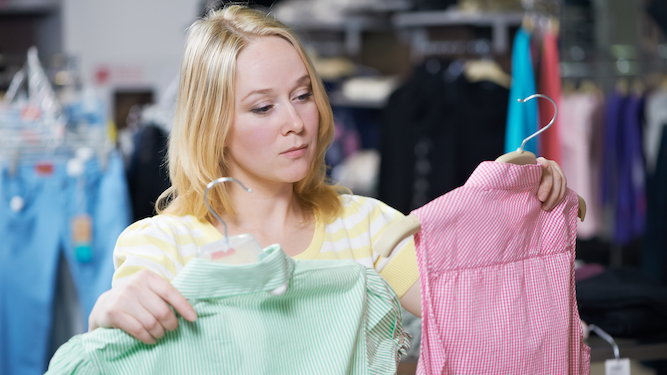 A WOMAN shopping for a new top is unable to find one that has not been ruined by an unnecessary details like a fake pockets or odd words.

Nikki Hollis has tried on numerous tops in numerous shops, only to reject them all after discovering a bizarre feature that renders them unwearable.

She said: “All I want is a normal item of clothing that doesn’t have one shoulder cut out or diamante spelling out ‘THAT BITCH’ across the back.

“Instead I find jumpers cropped to show the belly or so oversized they look like I’m drowning in chenille, dresses where they’ve missed out the sides, and blouses covered in fucking flamingos. Why?

“If I wanted words on my clothes I’d Tippex them on myself, when I’m 12. But I don’t. Especially not about being ‘a girl’, hashtags or shitty 90s rock bands I hated the first time around.

“I just want a top that looks nice, has a pocket for my car keys and doesn’t have a pattern of sickly yellow frogspawn. Is that too much to ask?”

She added: “I managed to find one that looks decent. Oh, it appears to have buckles over the nipples. How normal.”