Five excellent films to ruin with a shit prequel

A MAD Max prequel is in the pipeline, which may ruin everyone’s memories of the earlier films by being shit. Here are some more classics to f**k up.

‘What happened when Jaws was a baby shark?’ is a question no one has ever asked. A prequel could feature a cute little 12-inch Jaws learning the ways of the ocean. Basically anything that completely ruins the menace of the actual Jaws. Maybe Jaws could be friends with a crab?

The events of Toy Story are very clear, so it doesn’t need a prequel, but then neither did Alien or all the other films bollocksed up with one. The early life of toys is a bit limited, so the entire film would be about talking pieces of plastic waiting to be moulded into Woody, Buzz and all the characters we love.

Funny and moving with memorable characters, Withnail and I could be completely ruined forever by showing the jaded thespians years earlier as optimistic and supremely annoying drama school pricks.

Classic Brit thriller about gangster Harold Shand’s hellish Easter weekend. But what were Harold and wife Victoria doing earlier in the week? A prequel could focus on them sorting out nibbles for the party on their yacht, then end unsatisfyingly as the IRA start blowing people up.

Back to the Future

Okay, the sequels are also sort of the prequels, but that’s what happens when you mess with time travel. For simplicity this would tell the story of Marty’s teenage life: driving his parents to distraction practising Van Halen riffs, demanding a car, and non-stop wanking.

Homeless to be fined £20 million for sleeping in doorways because what f**king difference does it make? 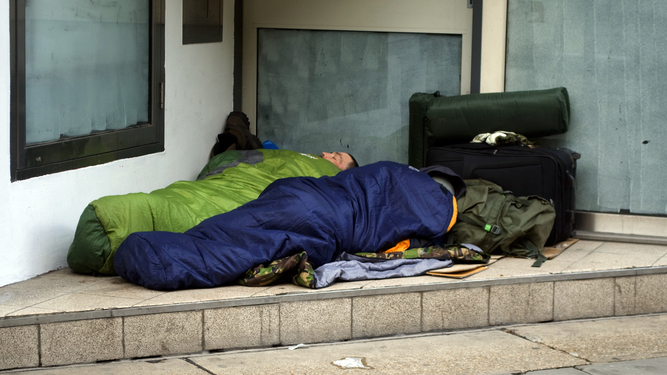 HOMELESS people on the South Coast are to be given large fines for vagrancy because whether it is £20 or £20 million makes bugger all difference.

Tory councillors have decided it is important to impress on the homeless the immense criminality of sleeping in shop doorways, even if the fines stand precisely no chance of being paid.

Norman Steele, a Conservative councillor in Dorset, said: “These hobos are parasites, using other people’s hard-earned doorstep concrete as pillows.

“In addition to fining them, we should seize all their assets – their UK properties, their stocks and shares, as well as all foreign investments they may possess.

“If they can’t stump up the full £20 million immediately we might have to settle for a smaller sum, say £20,000. They can sell their iPhones or we can set up a payment scheme out of their benefits which they probably don’t get anyway.

“I honestly can’t see why homeless people don’t go back to their own homes. As far as I can tell it’s just a camping holiday for louts.”

Homeless person Martin Bishop said: “I hope I don’t get fined because I’ve only got 17 pence in my savings account. By which I mean the cup next to my dog.”