BACK then everyone left the door unlocked, children played outside and TV adverts were frothingly insane. All of these would be certified 18 today:

Do you think about what you want to happen to you after death? These anthropomorphic potatoes certainly did, creating an acapella group to sing about how much they wanted to be cooked alive with their skins still on. They were joyful about it.

Count yourself lucky that the terrifying Mr Soft isn’t around nowadays, or this boneless monster in his melting world would interact with you on social media. Even in the 80s he was so trippy he inspired Oasis lyrics. Be glad he can’t reach you.

Weird and impeccably racist, this cinema advert featured a black-skinned boy in dungarees refusing to share his orangey drink with a gang of creepy crows who then assured him in gravelly tones: ‘I’ll be your dog’ and followed him forever. And the drink had nothing on Um Bongo.

Yet another off-putting anthropomorphic mascot came in the form of a soft-spoken rabbit with a coquettish pink bow urging us to give in to the sexiness of… caramel. Allowed pre-watershed, it created a whole generation of blokes desperate to bonk a cartoon.

Remember when you lived in constant fear that Danny Baker would turn up at your doorstep and ask how white your whites were? Why he, or anyone, gave a shit is anyone’s guess, but it certainly stuck in your mind every time you spilt red wine down your shirt. 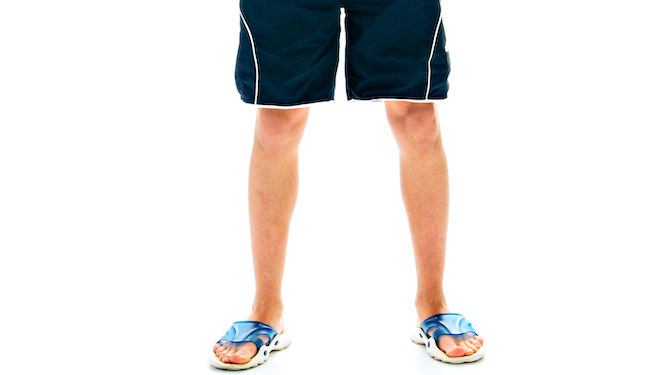 A MAN who has donned shorts for the summer months has been reminded how much urine spashes back from toilets.

Joshua Hudson had forgotten quite how much of his regular urination is absorbed by jeans during the rest of the year until visiting the loo while naked from the knees downward.

Hudson said: “You’d think by the age of 38 I would remember this unpleasant mist, but it comes as a surprise every time.

“I’m already used to giving my knees a quick wipe with the loo roll after every wee at home. Obviously when I’m out the pub I just have to leave them to marinate.

“I’m not sure whether it’s worse to feel the wee splashing on my bare legs in the summer or to imagine how my lower legs must smell during the winter. Either way, it’s disgusting.

“Will I do anything about it? No. After nearly four decades of splashback I can’t be arsed to change my technique now. I might try to wash my jeans more often.

He added: “Another things I always forget in the summer is not to wear flip flops into a pub toilet. Have you ever got half an inch of lager piss on your bare foot? It’s not pleasant.”