Five shows you don't need to watch the middle of

PUSHED for time? Bored of all the padding in a typical hour-long show? Here are five you can safely fast-forward through the middle 40 minutes of:

After the first five minutes you’ll know the couple and the plan. The middle is predictable: early snags, extra costs, creating fake tension with the crane lifting big windows, even though they’ve never dropped one in 21 series. Skip that and go straight to Kevin walking down the drive of the finished house. Instant payoff.

Essentially two shows in one: the beginning and end are for people with human emotions, and the middle is for dads. So enjoy the opening where the team find out the story of the damaged melodeon, ceramic harlequin and Regency snuff-box they’re repairing, then watch them do the job at 32x normal speed before weeping tears of joy when their owners receive them.

Everyone loves a murder, and it might be worth slowing down for the more grotesque killings along the way, but watch the beginning, either skip or drink through the middle, and stop at the end to discover that it was the choirmaster who impaled six people to discredit the harvest festival.

The only stuff that actually happens in Game of Thrones takes place at the beginning and the end. The rest is conversations in dark rooms and laborious changes of location. Only view the stuff with special effects and the ninth episode of each season and you’ll miss, say, Jorah getting greyscale then getting cured, and you’ll never know or care.

Cutting everything out but five minutes at the beginning and end will make this exactly as incomprehensible as watching all of it. Time saved to bake a cake. 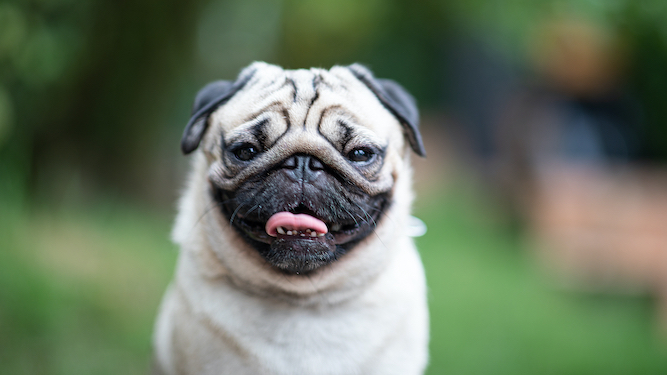 A WOMAN who has treated herself to a canine companion during lockdown has decided on one that is incredibly f**king ugly.

Grace Wood-Morris of Leeds is the proud new owner of a pedigree pug and is already enjoying parading its hideous squashed inbred face around her local park.

She said: “Look at him! Look at his nasty little squashed-up face like he’s been left upside down wedged in a tube for a week. Isn’t he adorable?

“I live alone and I’m kind of a bitch, so what I’ve missed most over lockdown is feeling superior to others. That’s why I decided to get a pug.

“I deliberately chose the ugliest and most contemptible dog available because I not only wanted to feel better about myself but to inflict its repulsiveness on others.

“You can’t believe the compliments little Mason gets in the park. You literally can’t, because they’re verifiably false. ‘He’s so cute!’ people say. ‘No he’s not,’ I reply, ‘He’s butt-ugly.’

“It’s such a comfort to me, knowing that he’ll never leave because nobody else would want him. This must be how women find husbands.”