A MAN has written a poor quality poem about the fog.

Engineering contractor Wayne Hayes was inspired by the swirling cloud that enveloped the road on his commute to work.

Hayes said: “There’s something about fog that really makes you think, so I decided to write a poem about it.

The poem uses the word ‘fog’ as a rhythmical device: ‘Fog/What is it? Where is it from?/Fog/Where does it belong? It seems so wrong?/Fog.’

In a later verse, Hayes ponders the longevity of the weather phenomenon: ‘Fog/Will it go away? Or will it stay, for another day?/Fog.’

Hayes said: “I’ve read it to my wife, who said it was great, and also sent it to the local paper who are considering it for publication.

“I’m going to quit my job today and become a full-time wordsmith.”

As yet unmade series of Star Trek is shit, say Trekkies 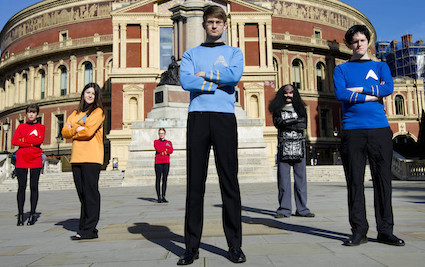 STAR Trek fans have confirmed the new series of the show is a disgrace, six months before it begins filming.

Moments after the news was announced, 10 theories emerged about why the show was terrible, including the, as yet unnamed, crew members’ badges being 3mm too wide.

‘Trekkie’ Wayne Hayes said: “The lead actor, whoever that will be, isn’t fit to follow in the footsteps of Kirk and Picard. Meanwhile, the entire season’s plot arc runs contrary to what I’ve decided is consistent with Star Trek law. Also, the Enterprise will be the wrong shape.

Message boards have united in opposition, with Trekkies vowing to follow the whole series online, then buy the DVD and Blu Ray box sets so they can watch it repeatedly while shouting ‘travesty!’.

US broadcaster CBS has promised to capture the spirit of the original series, by combining stilted performances from C-list actors and fights against people with knobbly foreheads.