THE next installation on the fourth plinth in Trafalgar Square is to be a series of horribly misogynistic tweets.

Nasty, stupid Twitter comments will be projected onto the side of the plinth and will cover a wide series of topics, from equal pay to fat shaming and DC Comics’ decision to make Wonder Woman a bisexual.

Artist Janet Hayes said: “It’s a reflection on the transitory nature of debate, the globalisation of discourse and how much white guys who live with their parents seem to hate female journalists.”

Hayes revealed her original idea was to install a misogynist tweeter on the plinth, but abandoned it after realising, ‘that it would just give the little fucker the attention he craves’.

She added: “The installation will remain in place until the internet becomes less hateful or the sun explodes, whichever happens first.”

Can we please hurry up and commit economic suicide? ask Brexit Tories 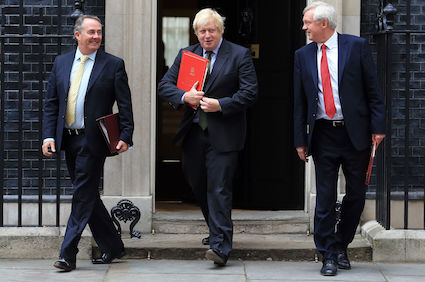 PRO-Brexit Tories have begged Theresa May to trigger the device that would blow Britain’s economic brains out.

Right wingers are exasperated that Britain is still functioning and want out as soon as possible so the country can die an honourable death.

Bill McKay, chairman of the Conservative pressure group Suicide Means Suicide said: “Every week Britain stays in the EU is another week in which we’re paying an imaginary £350 million to Brussels which could go to the NHS, except that it wouldn’t, even if that wasn’t a made-up figure. It is insane.”

International trade secretary Liam Fox said: “Outside the EU, we’d have the chance to show the world what can be done once all our car manufacturers had relocated abroad and our tech and finance businesses moved to Paris and Gemany.

“Brexit is a window of opportunity, just waiting for us to leap out of and plunge to our deaths from the 93rd floor.”