FRANCIS Bacon artwork sold for a record £89.6 million will be the centrepiece of a newly redecorated guest bedroom.

The Bacon triptych will be the basis of a feature wall above a guest bed accessorised by sequinned throw pillows in a three bedroom Loughborough home.

Purchaser Emma Bradford described the pictures as “something to look at”.

She continued: Now our Jason’s moved out weve put all his rubbish in the loft and repainted in Jasmine Sorbet, with flock wallpaper in a very strong raspberry coulis to anchor the room.

Unfortunately on the opposite wall, where it was all blank, you could see the marks from where he used to have his telly so we needed something to cover those up.

The triptych joins a tall vase with long silver sticks in and a pair of Laura Ashley tealight holders, an unwanted gift from last Christmas, in the room which Bradford wants to look like a boutique hotel but more homely.

She admitted: I didnt know there were three of them  we never did triptychs in art at school  and there isnt actually room, so the one on the rights in the garage for the time being.

Ive slotted it in next to that Van Gogh sunflower painting which clashed horribly with the lounge curtains. 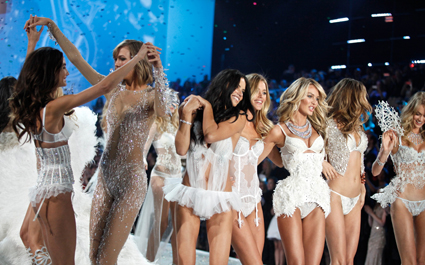 UNDERWEAR models at the Victoria’s Secret show have wowed audiences with the eerie emptiness in their eyes.

The annual fashion show, which according to newspapers is the latest American thing that you like, saw Amazonian women parading the deadest eyes and least convincing smiles ever seen.

Attendee Tom Booker said: “Frankly I was there to leer over the boobs at this weird corporate perv-fest, but it was the eyes that stuck in my mind.

“Flawless, empty, orbs in doll-like faces. It reminded me of my nan’s open-casket funeral.

“Also there was a bra covered in diamonds worth more money than some countries and some half-hearted PG rating pseudo-lesbianism.

“As a red-blooded male I thought I would be loving all this but I actually feel a bit scarred and am quitting my job to work with homeless people.”