Friends reunion to reveal it was shit

THE much anticipated Friends reunion will reveal that the cast hated each other, the characters were stupid and it was actually bollocks.

The show will begin with all six actors walking onto the set, wincing at the sight of Central Perk and sitting down stiffly to get this shit over with.

Audience member Helen Archer said: “They began by asking David Schwimmer about his favourite Ross moments, and he said that if he’d ever had any they’d been ruined by people shouting ‘Pivot!’ in the street.

“Jennifer Aniston admitted that for all her wealth, it was soul-deadening to only be remembered for something she hadn’t done for 16 years which wasn’t even that funny.

“Then Matthew Perry stared directly into the camera and said ‘People. Stop. It was only ever okay,’ followed by a tedious montage of him putting a weird emphasis on the word ‘be’.

“Lisa Kudrow and Matt LeBlanc agreed on what bullshit their characters were, then the cast were asked if they ever meet up and they said no, never, they actively avoid each other because it hurts to remember.

“It was a massive downer, but you know what? I needed it. I don’t want to watch Friends ever again. I’m free.”

How to have a shit ironic Eurovision party 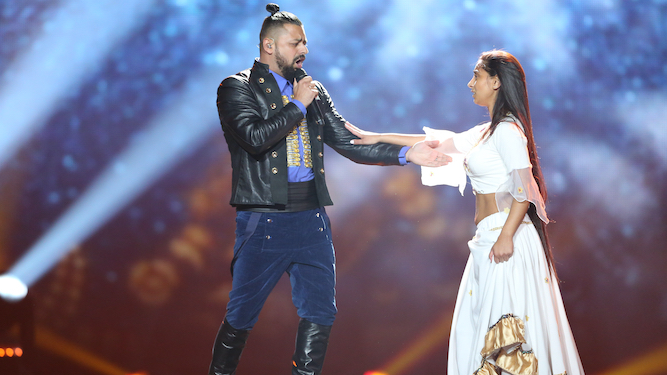 THE Eurovision Song Contest is on tonight, so you have to have an ironic gathering to celebrate this kitschy event. Here’s how:

Go to an inordinate amount of trouble to dress up as a Bavarian peasant, Spanish senorita or similar. This will add absolutely nothing to your enjoyment of the evening, and will actually cause you physical pain if you’ve decided to be Dutch and wear clogs.

Forget that the music is f**king shit

Arrive at the party full of excitement about all the fun you’ll have. Then realise that the key part of the evening is listening to several hours of execrable music: mystifying Bosnian folk-disco, an ultra-bland British pop act, and Norwegian soft metal. At least one act will appear to be taking the piss, and will probably win.

Discuss the confusing rules of Eurovision at length

Make sure to have a long and boring conversation about why Israel can enter when it’s not in Europe. Some clever dick – perhaps you – is bound to patronisingly explain it’s because the contest was originally set up by various TV companies not restricted to Europe and has f**k all to do with heartwarming cross-border friendship.

Make horribly complicated arrangements for each guest to bring the food of a different nation. This will lead to one lucky bastard just bringing an Asda pizza, while someone else will have spent hours trying to cook the Albanian national dish tave kosi and made it totally inedible.

Get embarrassingly drunk out of boredom

After two hours of glumly staring at the TV while the Maltese Celine Dion shrieks out a forgettable power ballad, you will probably be hitting the booze quite seriously. Various regrettable behaviour is now an option, from throwing up in the kitchen to attempting to dance and falling into the telly.