GERMAINE Greer has confirmed that she will be first in line for the forthcoming film Teenage Mutant Ninja Turtles: Out Of The Shadows.

The feminist academic and broadcaster has admitted being on tenterhooks since the end of the first film, which saw the turtles overcome arch-enemy Shredder but left vital plot points unresolved.

She said: “The fight scenes in the last one were insane, and I like the way they threw in some humour in the banter between the turtles. Leonardo is my favourite one because he has great one-liners and the best weapon.

“At the end of the first film Shredder got captured by the police, which was cool but as we all know Shredder has evil ninja powers, so it seemed almost obvious to be that he would somehow escape and come looking for revenge.

“It’s good that they’ve got alien mastermind Krang in the sequel, he’s my favourite from the comics. And Megan Fox is good in all her films.”

Greer confirmed that when the film officially opens next week she will be in Melbourne at a conference about vaginas, but she that plans to catch the Saturday matinee showing and buy all the merchandise.

Four in five couples desperate to break up with other couple 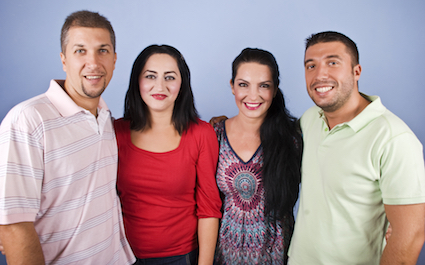 FOUR in five couples would like to end their co-dependent relationship with another couple, it has emerged.

According to new research, 42 per cent of couples do not like the man in the ‘best friend’ other couple, 62 per cent the woman and 100 per cent hated what their partners became when around them.

Tom Booker of Cwmbran said: “I don’t even remember when we met Marie and Pete. All I know is they’ve always been there.

“Every film is already booked with them, every bank holiday we have plans, you can’t get shitfaced in front of the telly on a Friday without them ‘being in the area’.

“Sometimes I have to go out just with Pete, the two of us. We spend the entire time searching for anything to say, resenting our wives’ friendship for trapping us like this.

“But then my wife insists he was my friend first.”

Pete Foster said: “Always, after an another abominable evening, there’s a moment where we all silently contemplate just letting the mess end here.

“But then someone says ‘Lovely evening, what are you doing Thursday?’ and the carousel of awkward suffering whirls on.”