Gig prices reduced based on number of songs from new album

GIG tickets will be priced according to the number of new songs a performer forces the audience to listen to.

Morrissey’s ticket price has dropped to £3.26

The scheme has been welcomed by fans who have sat through five tracks from The Who’s Endless Wire for every Won’t Get Fooled Again.

Promoter Nathan Muir said: “Acts like The Rolling Stones, who proudly refuse to bore their fans with tracks from Bridges Over Babylon, can continue to charge full price.

“In contrast Kate Bush, who insisted on performing the entire ‘song-suite’ A Sky of Honey from her 2005 album Aerial, now owes her audience a 38 per cent refund.”

The rule will apply across the board, with Neil Young at the O2 risking thousands if he delves into his 80s catalogue.

Meanwhile, EMF will lose out on 15 per cent of the door at the Exeter Phoenix if they play anything but Unbelievable.

Acts like Beyoncé whose new material is popular are exempt, because nobody goes to see them except girls anyway.

You con your idiots, I’ll con mine, Salmond tells Miliband 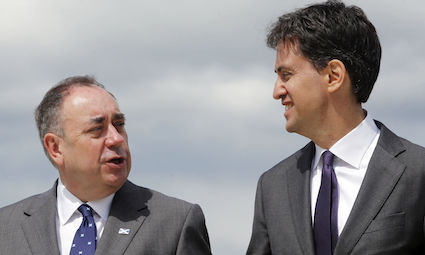 ALEX Salmond has told Ed Miliband to ‘button it’ after the Labour leader tried to expose his epic scam.

Scotland’s first minister insisted he was working a sweet little number and that Miliband was making it hard for an honest thief to earn some scratch.

Salmond said: “I’m in the middle of the greatest long-grift of my life and this guy tries to queer my action.

“I thought we had a code. You see a guy doing a thing and you back off and find your own cheese.”

Salmond’s grift involves promising everyone in Scotland a non-existent oil field and selling them a health service they already own.

He added: “Give a guy some elbow room. I’ve been working these piss-monkeys for years.”

Salmond then put his arm around Miliband’s shoulder and told him to go back to scamming English idiots with the no-cuts fandango.