FIVE people are begging their friend to see The Force Awakens so they can stop talking about it in code.

25-year-old Tom Booker has become the source of growing resentment among his social group for not having seen the space adventure while still expressing interest in doing so ‘soon’.

Friend Martin Bishop said: “The other day he said he had been to the cinema, but then he smiled and said he been to see The Good Dinosaur. By himself, on a Tuesday morning.”

Booker said: “What can I say? Sometimes you’re just in the mood for an animated dinosaur epic.

“However I am having an eye operation next week which means I can’t stare at bright fast-moving colours for at least a month. I forgot about that.”

“The Force Awakens is just that, again.” 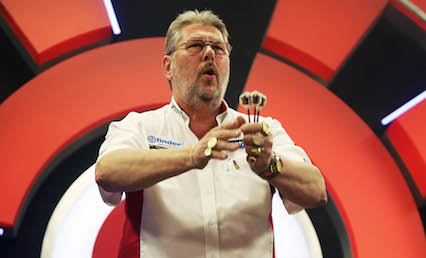 HYSTERICAL female darts fans have caused play at the BDO World Championship to be suspended.

The clash between Martin Adams and Jeff Smith was postponed after Adams’ fans rushed the stage in an attempt to get close to the man commonly acknowledged as the planet’s sexiest sportsman.

Play was halted while security removed the most passionate spectators, some of whom fainted when Adams addressed them directly.

Adams said: “My body is the result of a lifetime of pushing myself to the limit, and I suppose attention is inevitable.

“I can deal with the odd wolf-whistle, but we could barely see the dartboard through the blizzard of thongs.”