GUY Ritchie is to write and direct the worst Sherlock Holmes film in the history of cinema, Warner Bros confirmed last night.

The Lock, Stock director has lined up Goodfellas tough guy Ray Liotta to play the Victorian sleuth, while Dr Watson will be played by 'Outkast' frontman Andre 3000.

Bill McKay, of film bible Gaffer, said Ritchie’s film would be even worse than Sherlock Holmes and the Case of the Silk Stocking, which starred Rupert Everett and was described by one critic as an 'affront to western civilisation'.

McKay said: "Everett was even worse than Roger Moore in Sherlock Holmes in New York, and that made people set fire to hospitals.

"But if anyone can top that it’s Liotta. He’s only delivered two decent performances in his life – one of them was 20 years ago and there was that advert for Heineken.

"Plus he’s got a Guy Ritchie script to work with, which is 18-carat gold if you want to make a piece-of-shit film."

He added: "Apparently it will be based on a new comic book, not one of the original stories. He’s calling it a 're-imagining' which bodes incredibly well.

"The only good news is it won’t be out until 2010, so I’ve still got two years to drink myself to death."

McKay said while Ritchie’s Sherlock Holmes would be the worst ever, he doubted it would match the eye-gouging awfulness of the director's previous films Revolver and Swept Away.

He said: "Pretentious, fractured, convoluted and overwrought. And that was just the opening credits. For the love of God, make it stop." 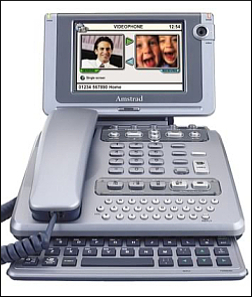 THE first contestant who manages to sell an Amstrad Emailer will win The Apprentice, Sir Alan Sugar said last night.

The Amstrad chairman said there was no higher accolade in the business world than selling one of the hybrid phone-email devices.

"'Who, in the name of Christ, would ever want one of these?' they would ask me, over and over again.

"But I kept making them – thousands and thousands of them – never losing faith that one day someone would come along who would actually be able to shift one of them."

He added: "The sales pitch is quite tricky because you basically have to make the punter believe he doesn't have a computer.

"I've sat through so many meetings where I'd say to the customer, 'you don't have a computer' and he would immediately say, 'yes I do – here it is, on my desk'.

"I'd then finish the meeting by telling him I'd send an email with some prices and he would say, 'okay, that's fine, I'll read it on my computer'."

Sir Alan said the winning contestant not only has to sell the Emailer but produce a photograph of the customer using it to send an email to himself which he will then read on his computer.

Meanwhile Lucinda Legerwood, the latest contestant to be fired, claimed she had been victimised because of her upper-class manner, but insisted she had 'no desire to sell Sky boxes to scum anyway'.