HOLLYWOOD could grind to a halt this week after some of the world's biggest stars threatened to pretend to go on strike.

Tom Hanks, Dustin Hoffman and Jack Nicholson have all warned the studios they will be so good at pretending to threaten to go on strike that no-one will be able to tell the difference.

The studios have stressed they are willing to negotiate, but only with bad actors who will give an unconvincing portrayal of someone who is threatening strike action.

Tom Logan, vice-president of Universal, said: "If these guys are at the top of their game we will have absolutely no way of knowing whether the negotiations are real or pretend.

"If Nicholson walks in here and tells me that I 'can't handle the truth' with the same conviction he used in A Few Good Men, I'll have no choice but to believe him.

"What if Hoffman dresses up as a woman and pretends to be a sassy hospital administrator called Dorothy? His pretend feminine wiles are legendary.

"And what if Hanks starts acting all weak and speaking in a croaky voice like at the end of Philadelphia? I'll be so overcome with sympathy I'll end up giving him everything he wants."

Logan said he was happy to talk to second-rate actors who do the same thing over and over gain, making it very easy to spot when they are pretending.

He added: "We'd love to sit down and thrash this out with Vince Vaughan doing his poor man's Bill Murray routine, or Jeff Goldblum's Jurassic Park, hip scientist bullshit."

Big Brother Contestants To Get More Bananas And A Rope Swing 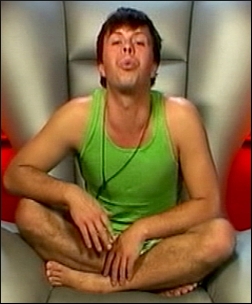 BIG Brother contestants are to be given more bananas and a tyre on a rope, Channel 4 said last night.

The troop spent the early days of the series sunning themselves on rocks and picking insects from each other’s hair.

However, they soon became bored and divided into rival factions, attacking each other with the sticks they use to catch ants. Last Thursday a tea party descended into faeces-ridden chaos.

A Channel 4 spokesman said: "Young Big Brother contestants are naturally curious and playful. But we are starting to see an aggressive streak which could lead to all out war and, eventually, cannibalism.

"If the bananas and the rope swing don't work we'll give them some beads and an exercise bike. After that we release the bounty hunters."

However, Nikki Hollis, an animal welfare expert, said: "Big Brother started off as a valid scientific experiment, but these poor creatures are now being made to perform like circus humans.

"The sooner we can release them into a life of fourth-rate celebrity and tragic personal appearances the better."