Holy Spirit to get spin-off testament

THE third member of the Holy Trinity is to star in its own all-new scripture, it has been revealed.

Despite being overshadowed by the more famous God the Father and His Son Jesus Christ, the Holy Spirit has long been a fan favourite.

Christian Emma Bradford said: “Ever since its first appearance in the Book of Genesis, I’ve wanted to see more of the Holy Spirit.

“He’s there in the background of the Old Testament and the New Testament, but rarely as a major character. When Jesus is doing the thing with the loaves and the fishes, I’m like, ‘What’s the Spirit up to?’

“I hope an early draft is leaked online.”

A Vatican spokesman said: “The first two Testaments set the bar high, but I can promise that the Holy Spirit dialogue is every bit as good as you’d expect from the people who brought you the Book of Exodus and the First Letter to the Corinthians.

“Promotional merchandising is difficult for a being that has no corporeal form, but promotional tongues of fire will be included in selected McDonald’s Happy Meals.”

However God fan Wayne Hayes, from Dewsbury, said: “This is just a cash-in project to distract us from the fact that they’ve been dragging their feet over a proper sequel for over two thousand years.” 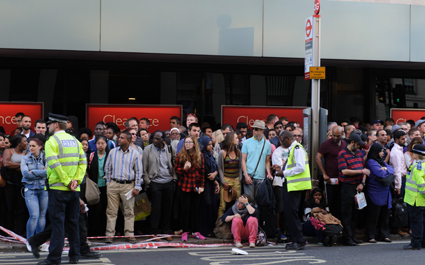 WORKERS are demanding postponement of the next tube strike so that they can think up fresh chit chat on the subject.

Union bosses confirmed further industrial action for August 5, which many Londoners feel is insufficient time for them to replenish their travel-based anecdotes and banter.

Recruitment consultant Nikki Hollis said: “When they vote on these things they don’t think of the effect it has on brief interactions between people with nothing in common.

“Last strike, I was the cock of the walk with my tale of how it took me five hours to walk to work and I had to use the toilet in a shop. How can I follow that?

“I’ve started putting together a short, dull monologue about taking up cycling to save some money and get fit but it’s nowhere near ready. ”

TFL has said it will offer conversational advisory noticeboards outside closed stations with key words such as ‘blitz’, ‘overpaid’ and ‘Thatcher’.

Many businesses will close on strike day, with bosses fearing that staff who have exhausted the novelty of their altered routes may begin to ask why they aren’t on strike themselves.