Hospitals demand better TV show about them than Casualty

HOSPITAL staff are demanding a much better television programme about their incredibly hard jobs than Casualty.

Doctors, nurses and ambulance drivers have said that the fact they deal with life and death at any given minute should warrant a show that is as good as The Sopranos or even First Dates.

“Then when I watch Casualty, my job looks like some boring arse mundane tripe which isn’t even as interesting as Gogglebox.”

“However, when I watch Casualty I can happily go and make a cup of tea at any point in the show without missing much.”

Asked as to what kind of show they would rather have based on their working lives, hospital staff suggestions included ‘Mad Casualty: Fury Road’, ‘something watchable’ and ‘anything without that bloke Charlie in it’.

Professor Henry Brubaker of the Institute for Studies said: “It’s not that Casualty is that bad, it’s just that it’s about as realistic depiction of a hospital as Mike Bassett: England Manager is of modern football.”

Rio Olympics opening ceremony to be not as good 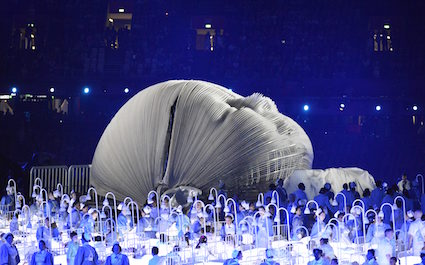 TONIGHT’S 2016 Olympic Games opening ceremony in Rio is widely expected not to be as good as the British one all about us.

Brazil has been advised that it cannot meaningfully compete with the ceremony regarded throughout the UK as the greatest ever, so the best thing to do is keep it low-key and short.

Roy Hobbs of Malvern said: “We had Emile Sande doing Abide With Me and a James Bond bit where the Queen, or at least a muscular much younger person dressed unconvincingly as the Queen, jumped out of a helicopter. You can’t beat that for razzle dazzle.

“Brazil may have Pele and Gisele, but we have Del Boy and Tim Berners-Lee who invented the internet.

“I’m more worried that it’ll be embarrassing for them than anything. If I was them I’d make it about Britain, then it might be good.”

Brazilian Jorge Monte said: “Can we do better than David Beckham on a speedboat? Mmm. Tough one.”