How to be a sneering dick about stuff you haven't seen

IS YOUR superiority to others based on not consuming the same media as them? Nathan Muir flaunts his iconoclastic ignorance of perfectly enjoyable things he hasn’t seen.

I’m told these are ‘fun’, if that’s what you look for in cinema. But I’ve noted there are lots of them, they’re popular and with their Hulks and Iron Men and Doctors Strange clearly unrealistic. You wouldn’t find mutants, gods and epic battles in the work of the Bard of Avon.

Apparently very funny. So not for me. I pay a BFI subscription and grimly labour through low-budget, rambling Brazilian indie films about HIV in the favelas. They’re more impressive to mention in conversation, even if no-one has come over for film night in 20 years.

It’s hard to be unaware of a cultural phenomenon like Star Wars, but I claim to be. Every time someone says ‘R2-D2’, ‘Chewbacca’ or ‘Maz Kanata’ I giggle at their absurdity. I feel this marks me out as a highly cultured intellectual and not just a massive cock.

Apart from the savage purity of early Felix the Cat, no. The Simpsons, Rick & Morty, South Park: all for children and safely dismissed as a genre because cartoons now are surely still rubbish like Penelope Pitstop from 1969.

I can’t just enjoy a well-made sci-fi horror film for straightforward entertainment and then watch a more weighty film on another occasion. That would be prostituting my exceptional intellect. It’s a shame because I’ve heard it’s rather good.

Do you know how much f**king effort it’s been not watching a single Tom Cruise film in four f**king decades? I airily declared ‘No, I’ve never watched a Tom Cruise film and never will’ in 1993 because I didn’t think he’d last. He’s still bloody here. Now if you’ll excuse me, tonight’s double screener is The Hunger and The Hands of Orlac.

The real reasons Jeff Bezos is going into space 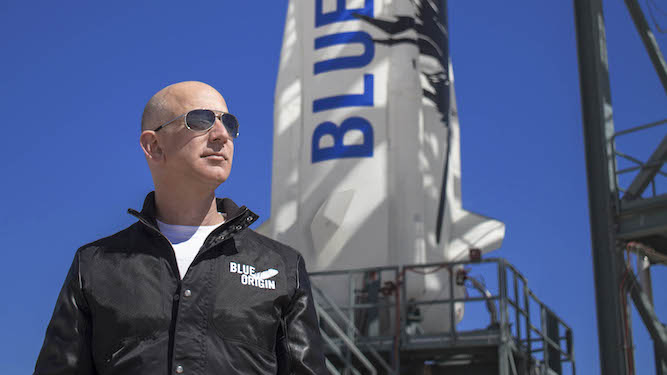 AMAZON boss Jeff Bezos is blasting into space, and there’s surely no reason to be suspicious about what the f**k he’ll do while he’s there. But why is he going?

To fulfil a lifelong ambition and shit on Earth

Only a few select astronauts, Laika, and some chimps have defecated in the Earth’s atmosphere and watched it fall, burning, to the planet below. Bezos hopes to be the first to do it out of sheer contempt for humanity.

To have a giant laser battle with Richard Branson

Branson is trying to beat Bezos into space so he can repurpose space lasers for a war, but when he gets there Elon Musk is already tooled up! The three billionaires face off in an orbital battle which lights up the night skies and destroys all our satellites.

To take a decent Tinder photo

All the best Tinder photo locations have been done a thousand times, but zero gravity with Earth winking over your shoulder will get the girls’ attention. Provides an ideal opportunity to slip in that you’re the world’s richest man.

Sick of pandemics, divorces and having to set the new Kindle Daily Deal at five past midnight every night, Bezos is moving to space. From his orbiting palace he will watch the cancer of Amazon spread across the globe devastating it while smoking a cigar.

To move Amazon up there

Orbit is the ultimate distribution centre. By moving his fulfillment centres to the upper atmosphere, Bezos can deliver packages by sending them down as meteors direct to your home. They may smash your house and kill your dog but it’s so bloody convenient.

To pass the time

He’s a geek billionaire just out of a divorce, bored, at home, watching Star Trek: Voyager. Of course he’s going to space.