ANYONE with an opinion about Madonna’s behaviour is playing into the hands of society’s evil puppet masters, it has been claimed.

“Madonna is a modern day gorgon. I’m not saying she looks like a gorgon, because then everyone would start calling me a misogynist and I would not get home in time for dinner.

“I just mean that if you look at her you turn to stone, or rather die a little inside.

“Even discussing this sort of cynical shite makes me feel dirty, but it does seem to be depressingly effective.

“There is lots of good music out there. Go and find it. Walk into a record shop and ask a human about it, then use your brain and emotions to decide what you like instead of just doing what the telly says.”

Twitter user Stephen Malley said: “I bet her mouth tastes of…a thing. Also, it would be considered a sex attack if that were a man doing it to a woman. But I would be up for it because she is like a fit nan.

“Is that everything covered? Do I get my free t-shirt now?

“I love feeling like I’m taking part in something important.” 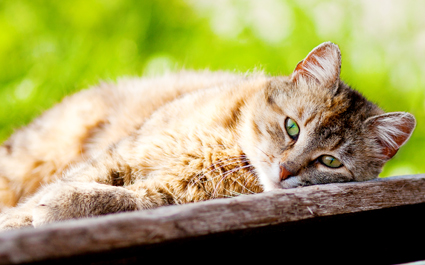 CAT are incredibly keen on high temperatures despite having thick pelts, it has emerged.

Four-year-old cat Julian Cook confessed a desire to lie sprawled in direct sunlight during the coming heat wave, ideally in a mostly-glass room with all the radiators on.

He said: “My love of extreme heat freaks everyone out, especially when they see dogs who generally have lighter coats but look completely fucked when it’s even moderately warm.

“I love to be super hot because I get trippy visions, like in a Native American sweat lodge. It’s way better than catnip and you don’t get the headachey moody feeling afterwards.”

Brown-and-white cat Susan Traherne said: “My attitude to intense sunshine is ‘what doesn’t kill you makes you really sleepy’.

“When I’m lying spread-eagled in a greenhouse in July people ask me ‘are you too hot?’ or even start discussing among themselves whether I might be dead.

“But for me there is no ‘too hot’. It’s another unexplainable part of the feline condition, like the weird shit we do with mice.”