Industry insiders say dozens of executives have downgraded from cocaine soaked in champagne or premium vodka, to 'street highs' such as crack, glue and air freshener.

A record company source said: "Every time you download something for nothing a record company boss has to adjust his lifestyle. Offices throughout Soho are piled high with cheap bottles of glue and bags of crisps."

The source added: "Just last week we received word that a record company executive had to cook for himself. We can only give thanks to God he had someone to do the dishes.

"These people are used to having cocaine brought to them on one of the platinum discs for Tubular Bells, carried by the attractive girl from Steps or one of the early Sugababes.

"It's not as if they're musicians who can afford several houses with staff. Many of these guys have just two or three houses, often looked after by a part-time housekeeper who answers back.

"This time next year they'll be on family tax credits and clipping coupons out of the paper."

The industry is to launch a £10m campaign to highlight the growing crisis. A cinema advert will feature an executive enduring a cheap haircut, having a pizza delivered and ironing his own shirts to the strains of Drive by The Cars. 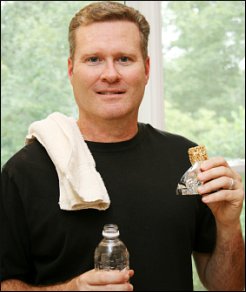 POSITIVE thinking has failed to halt the wildfires in California with millions fleeing their homes despite staying fully focused on their goal of not seeing their house transformed into a smoking ruin.

Most Californians did not even bother to alert the fire services and instead tried to stop the inferno by remaining optimistic, expecting success and maintaining high levels of self-esteem and confidence at all times.

Bobbi Killitz, 43, from San Andreas, said she was astonished to see her duplex apartment go up in smoke despite creating vivid mind pictures of joy, health and a building that was not a blackened shell.

Ms Killitz said: “I can’t understand it. I spent all morning thinking constructively and creatively while believing in myself and my abilities.

“I spent all afternoon chucking buckets of water on a pile of charred rafters and searching for my cat. Still, I am sure it will all turn out for the best. Have a great day!”

Carl Muntz, 36, also of San Andreas, said he had looked upon the flames as a challenge and an opportunity and thought about them in terms of “I can”, “I am able” and “I can succeed” however his condo had still caught fire, and his Toyota Prius was now a charred wreck. “At least my crystals survived,” he added.

Danny Kravitz, 52, a fluffer of San Fernando, said he refused to accept the destruction of his home and loss of his entire family as a major setback.

He said: “If anything it is a blessing in disguise, I can build on this situation to get myself a bigger house and a much better looking wife so we can produce prettier and more high achieving children than the ones I lost in fire. I know I can. All I have to do is believe.”