Johansson film is thought-provoking, haunting and has breasts in it

UNDER the Skin is an elegiac masterpiece where you see Scarlett Johansson in the nuddy, according to critics.

The Guardian critic Peter Bradshaw said: “This story of a voluptuous alien predator is like a social-realist take on Cronenberg’s best work.

“Also there are boobs in it. Not just boobs in fact, you get to see the lot, it’s awesome.”

Telegraph reviewer Robbie Collin said: “It’s a masterpiece, combining echoes of Polanski with situationist techniques and a nod to the cosmic horror of HP Lovecraft.

“And there’s hooters in it a couple of times, once around the 27 minute mark, then again later. 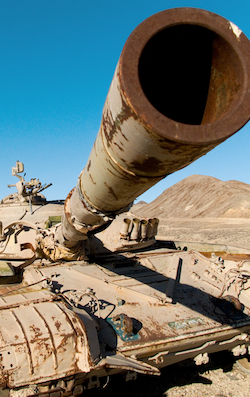 BRITAINS big four supermarkets are asking shoppers to join them in a massive, deadly war.

The companies have opted for tanks and guns after growing weary of having to change their prices every day.

A spokesman for Asda said: It’s a pain in the arse. Having a proper war will sort everything out.

In a bid to bolster troop numbers the supermarkets are asking shoppers to join their armies with the promise of extra loyalty card points if they survive the first two weeks.

A Sainsburys spokesman said: We think a lot of our customers will be eager to take part in a ground assault on their local Tesco, especially if its been softened-up with an artillery barage.

And theyll get 50 Nectar points which they can use to buy some vine ripened tomatoes, as long as it doesnt cause horrible flashbacks.

It is understood that Tesco is constructing a Viet Cong-style network of tunnels so its shoppers can pop up in the Morrisons cheese aisle and garrotte people. Morrisons has pledged to train its customers in the deadly Korean martial art of ‘Haidong Gumdo’.

The Asda spokesman added: Have you seen our customers? This is going to be a doddle.

Aldi and Lidl stressed they would not be taking part in the war, even though they are both German.

Meanwhile, Waitrose said it will also be sitting it out because its customers are a bunch of middle class, liberal cowards.