Jungle bikini celebrity has a penis

FANS of I’m A Celebrity… are in shock after a breast owner was revealed to have a penis.

Viewers of the jungle-based ogling experience were enjoying close-ups of a minor actress’s bikini-clad breasts when the camera tilted down to reveal she had a penis.

Former ITV fan Tom Logan said: “Like all heterosexual men, after a hard day at the office I like to sit on a chair, crack open a can of widely-advertised lager and look at tits.

“This was all going swimmingly when one of the birds – I’m not sure they have names as such – stripped down to her shreddies for some gratuitous showering.

“First there was a leering close-up of her shapely swedgers. So far so good.

“But then as the camera moved down her body, it emerged she was wearing no pants and had a huge wang and balls.

“I threw up into my lap. Although as the revulsion subsided I felt intrigued enough to continue watching.”

Ant said: “You weren’t expecting that, were you eh? That’s what the show’s all about, making you question your sexuality and by extension your identity, perhaps even triggering deeper existential questions that touch on the very nature of humanity.”

Dragonriders ‘get most job satisfaction’ 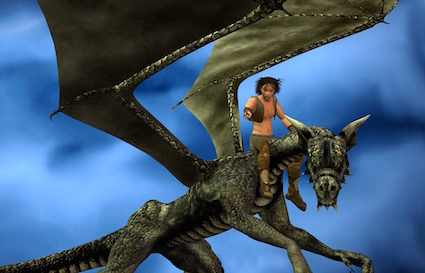 THE top career for job satisfaction is being a dragonrider in the fantasy world of Nazgar, according to a survey.

Research by City & Guilds found that while landscape gardening and being a paramedic scored highly in terms of job satisfaction, none matched up to defending the people of Nazgar on a dragon steed.

Dragonrider Wayne Hayes said: “Patrolling the azure skies of Nazgar on a massive dragon is great if you like working outdoors and being your own boss.

“There’s no such thing as a typical day. One day you could be finding an ancient spell tome for a friendly wizard, the next you’re battling the orc armies of Baalath, Dark Lord of the East.

“You just don’t get that sort of variety working in a bank.”

Dragonriders need a good head for heights and must like lizards. Hayes also stressed the need for flexibility: “If there’s an invasion by an orc horde, then you could end up working the whole weekend.

“Battling the forces of evil creates a great team spirit though, and you get to meet a lot of elven princesses, who are pretty filthy if you can put up with them banging on about prophecies.”