The band, who are fervent LCFC supporters, have over the last 48 hours reached millions of people unfamiliar with landfill indie by appearing on current affairs shows.

“Most audiences exposed to them had already built up a tolerance, if not complete immunity, to indie bands and even found their lumpen faux-experimental rock funny.

“But to a 63-year-old man who hasn’t heard indie since Britpop, sudden exposure to Serge’s bearskin guard haircut and his band’s plodding, unimaginative riffs can push the heart into arrhythmia.”

Retired train driver Roy Hobbs said: “I was at home when suddenly this… band came on ITV News Central.

“They were playing the usual instruments but somehow it was so much worse than anything I’d ever heard before. When the singer rhymed ‘Stevie’ with ‘TV’ mercifully I blacked out.

“I woke up in hospital. They say if I ever hear music again, it will kill me.”

Tests ‘prepare children for constantly being judged by idiots’ 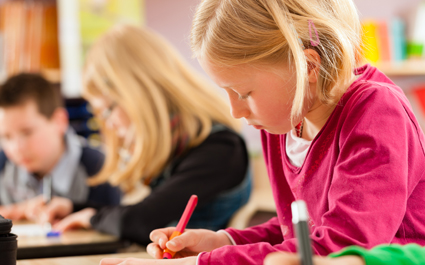 TESTING children at school is the only way to prepare them for constant, arbitrary judgement as adults, it has been claimed.

After parents protested against SATs tests, supporters of exams said they were necessary to introduce children to the concept of stupid people deciding their worth.

A government spokesman said: “Tests help children understand they will be judged in life for essentially meaningless things, such as whether they own a car or have nice hair.

“By subjecting children to endless tests we’re toughening them up for a world where people will write you off as a pointless individual for not liking sport.

“Being criticised for failing to identify the odd one out from a series of shapes is also good preparation for being bollocked by your boss over pointless tasks.”

Parent Tom Logan said: “At some point kids have to learn life is all about fitting in with the prejudices of shallow, judgmental idiots.

“I don’t want my son to reach his teens and discover girls won’t even consider going out with him because he’s wearing slightly the wrong type of trousers.”

Six-year-old Stephen Malley said: “Tests make me scared, but at least I won’t be surprised in the future when someone thinks I’m a worthless piece of shit for renting instead of buying.”