Loads of cheap gigs better value than one expensive one

ANALYSTS have confirmed that going to lots of cheap gigs is much better value than going to one big expensive one.

A new study found that going seeing small bands on the way up or medium bands on the way down offered up to ten nights entertainment a year for the same price of seeing a legend in their prime.

Professor Henry Brubaker, of the Institute for Studies, said: “First and foremost, ten nights out are better than one night out because on the latter, you can only get pissed once.

“Second, each band only has a limited number of songs you know and want to hear. The more bands you see, the more of those songs you’ll get to pogo to at the end of a gig.

“Third, small bands play small, sweaty venues where you get to rub up against attractive people and may even get off with them, as opposed to massive arenas where you’re annoyed they’re making you queue for nachos.

“It might seem illogical, but you’ll actually get more enjoyment from some also-ran Britpop veterans than you will from a rock great whose music you’ve loved for 30 years. 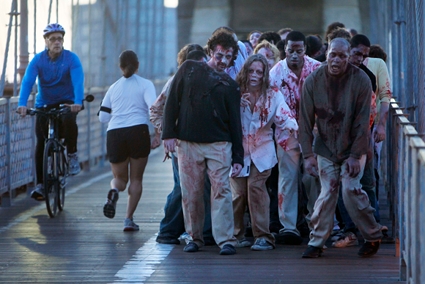 SCIENTISTS have vowed to work around the clock to bring about a zombie apocalypse by the end of March.

The experts have set themselves a strict deadline amid accusations that climate change or nuclear war seems more likely to kill everyone, rather than the far more interesting zombie hellscape.

Professor Henry Brubaker, of the Institute for Studies, said: “The people have instructed us to deliver one simple thing – reanimated corpses trying to eat their brains – and we must not let them down.”

Stephen Malley, from Hatfield, said: “Stop pissing about with the Large Hadron Collider and sort it out.

“I don’t care about the details – a radiation experiment that goes wrong or a virus that gets leaked into the water supply – it doesn’t matter.”

Malley added: “I’ve already bought the weapons and if there isn’t a zombie apocalypse soon my girlfriend is going to make me sell them all.”