THE chocolate citizens of M & M’s World are living under a brutal totalitarian regime, it has emerged.

M & M’s World in London’s Leicester Square began as a social experiment to give chocolate-covered sweets and peanuts self-determination.

However a failed harvest caused many M & M’s to starve, and paved the way for a charismatic blue M & M known only as ‘He Who Never Melts’ to recruit a large peasant army.

“Red M & M secret police arrived at their tiny cellar base and took them off to a ‘chocolate correction centre’. They were never seen again.”

Mother-of-two Nikki Hollis took her family to M & M’s World: “I thought we’d just buy some sweets and maybe a pencil case, but it’s actually a thought-provoking and nightmarish vision of unbridled power that made my children sick with fear.” 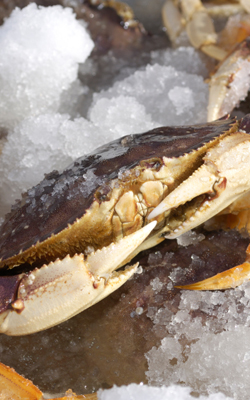 CRABS are capable of verbalising obscenities, it has emerged.

Researchers into whether crustaceans can feel pain discovered that if you listen carefully when dropping them into very hot water you can hear a stream of filth.

Professor Henry Brubaker of the Institute for Studies said: “We attached a waterproof microphone to a brown crab then chucked it into a pot.

“It was clearly saying ‘fucking hell’, ‘shit the fucking sea bed’ and ‘my frigging exoskeleton’s on fucking fire’.

“As you can imagine, it was a great moment for science as we sat listening to the tiny, chittery voice saying ‘I’ll fucking get you for this, you monkey bastards’ over the lab speakers.”

Further research revealed that crabs swear all the time, not just when they are being boiled alive.

Professor Brubaker said: “Although they do use the word ‘fuck’ crabs don’t have penises, so instead crab swearing refers to reproductive organs called gonopods.

“A crab that is arguing with a rival will typically say, ‘Suck my gonopods, gono-face’ or ‘Go claw yourself’.

“They are fascinating creatures.”