A MEMBER of the middle class has admitted not having seen the stage version of War Horse.

Mother-of-two Emma Bradford said: “Everyone I know has seen it. One of my friends has seen it 14 times.

Bradford made the admission after attempting to bluff it during a conversation about the play’s striking puppetry.

“I made a comment about how you couldn’t even see the strings and everyone looked at me coldly.

“Since then the supper invitations have dwindled to nothing.”

UKIP ‘may be a bit racist’ 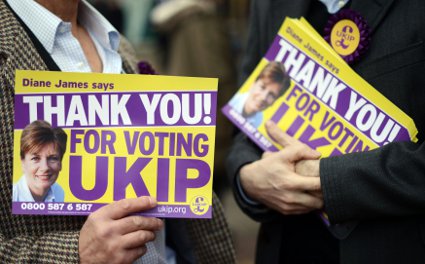 BRITISH politics was in turmoil today after a documentary revealed that UKIP has been infiltrated by racists.

Julian Cook, professor of politics at Roehampton University, said: “This has come out of nowhere. I think a lot of people who were thinking of voting UKIP will be changing their minds now.

“That said, it could just be a few bad apples and UKIP will no doubt put in place mechanisms to prevent it from ever happening again.”

There had been rumours of racism within the party in recent months but none of the stories became public because of a lack of hard evidence.

Cook added: “It seems the rumours were, to some extent, true. I suspect the media will now try to discover if there are any other racists in UKIP.”

UKIP leader Nigel Farage said he had ‘been awake all night wondering how on earth these people were able to join the party’.

He added: “UKIP has always been an inclusive and progressive political movement and, as far as I was aware, our candidate selection was very rigorous.

“I really don’t know what else we’re supposed to do.”